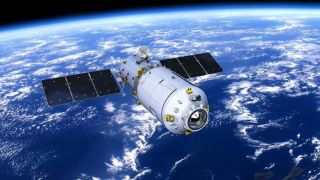 China's bid to establish a permanently crewed space station got a boost today (April 20) with the launch of the country's first cargo supply spacecraft: the Tianzhou-1.

The uncrewed Tianzhou-1 cargo resupply spacecraft launched into orbit atop a Long March 7 Y2 booster from the Wenchang Satellite Launch Center in the southern island province of Hainan. Liftoff occurred at 7:41 p.m. local time (7:41 a.m. EDT/1141 GMT) at the spaceport.

A big test for China

Tianzhou-1 is a vital element in China's planned space station,which is set to be pieced together in the 2020s. The Tianzhou-1 spacecraft is 34.7 feet (10.6 meters) long and nearly 11 feet (3.35 m) in diameter at its widest point. It weighs 9.4 tons (8.6 metric tons) on its own and can carry more than 6.6 tons (6 metric tons) of supplies, according to a China Manned Space Agency statement.

The supply ship is expected to link up with the now-orbiting, but currently unoccupied Tiangong-2 space lab. A major objective of the mission is to perform refueling tests of the space lab, a prelude to China maintaining a larger space complex in the near-future, according to China Manned Space Agency officials. [China's First Space Station in Pictures]

After entering orbit, according to CCTV-Plus interviews with Chinese space officials, Tianzhou-1 is slated to conduct a first docking with Tiangong-2 in a few days. The two spacecraft will then have a two-month in-orbit flight to test the liquid-propellant refueling as well as the cargo spaceship's control of the combined vehicles, CMSA officials said.

The two spacecraft will also fly separately for three months, during which time the cargo spaceship will complete its own space science experiments. Then the two will have the third docking to test the automatic fast-docking technology, a test to complete the docking within 6 hours.

According to Chinese space authorities, there have been more than 600 ground tests that demonstrated Tianzhou-1/Tiangong-2 docking hardware.

"A space station has two docking ports, forward and backward," said Bai Mingsheng, chief designer of the Tianzhou-1 cargo ship at the China Academy of Space Technology, in a CCTV-Plus interview. "So a cargo spacecraft must be able to dock with the station from both directions. This time, Tianzhou-1 will separate from Tiangong-2's backward port and then fly around it to dock from the forward port to examine the docking ability. This is the primary mission of the combination."

"These are new experiments," Bai said in the interview. "A shorter docking time for manned spaceships is of great significance as it will make astronauts more comfortable."

Leonard David is author of "Mars: Our Future on the Red Planet," published by National Geographic. The book is a companion to the National Geographic Channel series "Mars." A longtime writer for Space.com, David has been reporting on the space industry for more than five decades. Follow us @Spacedotcom, Facebook or Google+.  This version of this story was posted on Space.com.