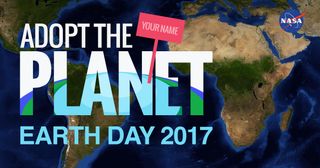 This Earth Day (April 22), NASA wants people around the world to "adopt" one of 64,000 sections of the planet seen from space.

Visitors to the agency's "Adopt the Planet" website will receive an adoption certificate for a unique, numbered section of Earth's surface, with each hexagonal plot averaging about 55 miles (89 kilometers) wide. The certificate also shows "data layers" of that patch of Earth, revealing highlight features of the planet that the unaided human eye cannot see, such as air-quality levels. Visitors can also print certificates for chosen locations.

(Of course, the adoption certificates do not grant any actual entitlement to the land; the sections will be randomly assigned, and the certificates won't "confer any legal or ownership rights," according to NASA.)

On Thursday (April 20), visit "Earth Day in the Nation's Capital" in the main hall at Union Station in Washington, D.C. This event will include NASA's hyperwall, which consists of several high-definition screens capable of displaying multiple data visualizations and images from NASA. The event will also offer hands-on activities and demonstrations. The event runs from 9 a.m. to 5 p.m. EDT and will include a visit from former astronaut Scott Altman from 12 p.m. to 1 p.m.

On Friday (April 21), visit "Hayden Planetarium Special Event: Earth Day Celebration in New York" at the American Museum of Natural History in New York. The event starts at 7 p.m. EDT. It will explore the history of Earth Day (including the famous image of the planet taken during the Apollo 8 mission that sparked the movement) and how scientists today use satellites and computers to monitor global change.