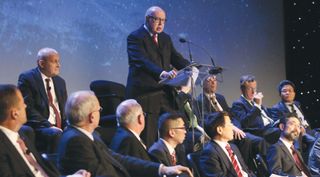 Robert Walker, the former U.S. congressman and Trump space adviser, had the unenviable task of bringing order to a panel discussion involving the leaders of 15 of the world's space agencies.
(Image: © Tom Kimmell)

COLORADO SPRINGS — With NASA's long-term strategy for human missions to Mars in flux, heads of several space agencies said they supported initial missions to the moon as a key step before going to Mars.

During an April 4 panel session during the 33rd Space Symposium that featured representatives from 15 agencies, many expressed support for going to Mars only after building up experience at the moon first.

"We think that the moon is also a very important step. Mars is not the ultimate goal," said Jan Woerner, director general of the European Space Agency. "The moon is an intermediate step to go to Mars, but the moon can also offer some special opportunities." [Moon Base Visions: How to Build a Lunar Colony (Photos)]

Woerner, as he has done in recent years, promoted his vision for a "Moon Village," a lunar facility that would include contributions from various countries and companies. "Moon Village is part of our overall strategy," he said.

The Moon Village concept got an endorsement from Yulong Tian, secretary general of the China National Space Administration. He outlined plans for a series of robotic missions to the moon in the next several years, including China's first sample return mission, Chang'e-5, scheduled for launch in November.

Later missions, Tian said, would include missions to the lunar poles, thought to have deposits of water ice that could support future human bases. "In the coming five to 10 years we have a few more missions to the polar regions of the moon, including establishment of a lunar base, or part of the Moon Village," he said.

In a press conference here April 4, Igor Komarov, director general of the Russian state space corporation Roscosmos, said he has talked with ESA about participating in any Moon Village effort.

"We should go to the moon," he said, in part to study issues associated with Mars missions. "It's better to solve all these problems on the moon before going to Mars."

Smaller space agencies on the panel shared a similar desire to do lunar missions first. "We don't consider the flight to Mars as a vital program or task," said Yuriy Radchenko, chairman of the State Space Agency of Ukraine. "Currently, we are very seriously considering tasks connected to lunar exploration."

NASA's current plans for human missions to Mars have not emphasized a human return to the lunar surface as an intermediate step. Instead, NASA has been planning for missions in cislunar space, lasting up to a year at time. The agency has, in recent weeks, provided more details about that concept, including the sequence of missions to build up what it calls the Deep Space Gateway.

That gateway could support human missions to the lunar surface by NASA's international or commercial partners. "The goal is to see out what we can prove out in the area around the moon and work with our international partners on what we do on the surface of the moon," said NASA Acting Administrator Robert Lightfoot.

He did not rule out, though, NASA activities on the surface of the moon, such as testing technologies for in-situ resource utilization. "We think we can maybe do some work on the moon to feed forward for how you would do it on Mars," he said.

One agency head, though, showed little interest in going to the moon. "We think that the future is Mars, rather than the moon," said Roberto Battiston, president of the Italian space agency ASI. Lunar missions, he said, could help prepare for Mars, "but the real future goal, in the long term, is really getting to the next challenge, which is Mars."