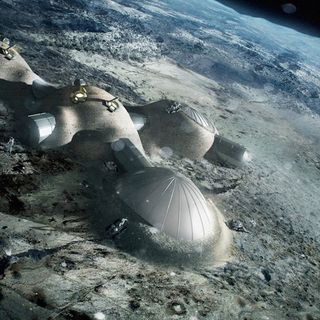 Artist’s illustration of a crewed moon base. Establishing such off-world outposts and a sustainable space economy will require a secure and safe environment, Air Force officials have said.
(Image: © ESA/Foster + Partners)

The United States Air Force may become a sort of space cop in the not-too-distant future.

An off-Earth economy cannot truly take off unless moon miners and other pioneering entrepreneurs are able to operate in a safe and stable environment, said Air Force Lt. Col. Thomas Schilling, of Air University.

"The [U.S.] Navy secures the freedom of action for commerce globally for the good of all humankind, and I think it's going to take a force very similar to that to provide the predictability and security that the marketplace of space will need," Schilling said Tuesday (April 4) during a panel discussion at the 33rd National Space Symposium in Colorado Springs, Colorado. "I think that would be the role of the United States Air Force moving into the future." [Home on the Moon: How to Build a Lunar Colony (Infographic)]

Somebody needs to secure and protect "strategic choke points," such as lunar ice deposits and gravitationally stable spots near the moon, where spacecraft can camp out without burning fuel, Schilling added.

"Fundamentally, I'd like that to be somebody with a value system that reflects the values that I share," he said. "I believe in the value of individual property rights and the rule of law."

The panel focused on how activities in cislunar (Earth-moon) space could help spur the establishment of a sustainable off-Earth economy — the basic idea behind the ULA-led "Cislunar 1,000" plan.

"We have a vision: Within just a couple of decades from this moment in time, there will be 1,000 men and women living and working in space permanently," Bruno said. "As NASA and other people push deeper into deep space to explore, we want to develop the space between here and the moon."

This vision is not so far-fetched, panelists said. Indeed, humanity may have recently reached an inflection point in the quest for off-Earth settlement, thanks to the combination of advancing technology, a glut of investment money and a coalescing community of customers and end users, Keravala said.

Some of this technology is pretty high-profile. Made In Space is already manufacturing products on demand for customers using its 3D printer aboard the International Space Station, for example, and both SpaceX and Blue Origin have landed and re-flown rockets — an approach that could lower the cost of spaceflight significantly.

"We have an opportunity to do this now," Magnus said, referring to the Cislunar 1,000 vision. "It's going to take some time to build this, but the momentum's there, and it's very exciting."

Establishing a secure environment in which such a space settlement can exist is part of the overall effort,  Schilling stressed.

"There's an old saying — 'The flag follows commerce,'" he said.

Bruno agreed with that assessment. But, he added, "successful and prosperous commerce comes after the flag. We see that today on Earth: Where regions are stable and secure, where people are safe, commerce flourishes. And where that is not true, it does not."

You can watch the entire panel discussion at ULA's YouTube channel.