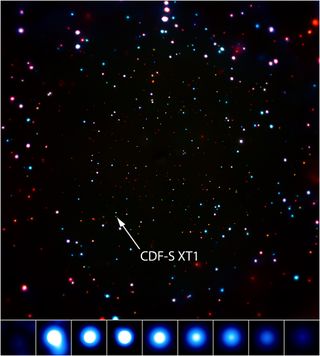 Astronomers spotted a peculiar burst of bright X-rays in a distant area of the universe, and they're not quite sure where it came from.

"Ever since discovering this source, we've been struggling to understand its origin," Franz Bauer, a researcher at the Pontifical Catholic University of Chile in Santiago, said in the statement. "It's like we have a jigsaw puzzle but we don't have all of the pieces." Bauer is the first author on a new study probing the source. [The X-Ray Universe Revealed in Chandra Images]

While astronomers have yet to determine the exact source of the mysterious event, archived data from NASA's Hubble and Spitzer space telescopes shows that the event likely occurred in a faint, small galaxy about 10.7 billion light-years from Earth, according to the statement.

The new study suggests that the X-rays may be the result of a gamma-ray burst — a powerful but brief explosion triggered by the collapse of a massive star or the collision of two neutron stars — or a white dwarf star being devoured by a medium-size black hole.

However, "none of these ideas fits the data perfectly," study co-author Ezequiel Treister, also of the Pontifical Catholic University, said in the statement. "But then again, we've rarely, if ever, seen any of the proposed possibilities in actual data, so we don't understand them well at all."

Using archived data from the Chandra telescope, the European Space Agency's XMM-Newton space observatory and NASA's Swift satellite, the astronomers hope to uncover other examples of this mysterious event and possibly image the same phenomenon from other objects in future observations.

"We may have observed a completely new type of cataclysmic event," study co-author Kevin Schawinski, a professor of astrophysics at the Swiss Federal Institute of Technology in Zurich, said in the statement. "Whatever it is, a lot more observations are needed to work out what we're seeing."

Their findings will be published in the June 2017 issue of the journal Monthly Notices of the Royal Astronomical Society, and they're currently available on ArXiv.org.