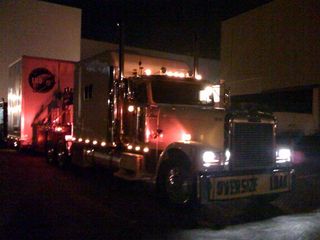 The truck that is driving LRO to Florida left the Goddard Space Flight Center before dawn to avoid as much traffic as possible.
(Image: © NASA)

Twospacecraft are headed for NASA's Florida space center to prepare for theirpiggyback mission to the moon.

NASA'sLunar Crater Observation and Sensing Satellite, known as LCROSS, set out fromNorthrop Grumman's facility in California this week for the agency?s KennedySpace Center spaceport in Cape Canaveral Fla. Meanwhile, NASA's LunarReconnaissance Orbiter (LRO) — which will launch with LCROSS — was alsoexpected to make the same trip.

Thetwo unmanned spacecraft are the first in NASA's plan to returnhumans to the moon and begin establishing a lunar outpost by 2020. LCROSSwill aim a doublesledgehammer at the moon to search for water ice in a permanently shadowedcrater near one of the lunar poles. LRO will spend at least one year in a lowpolar orbit on its primary exploration mission, with the possibility of threemore years to collect additional detailed scientific information about the moonand its environment.

Thejoint LCROSS/LRO mission is currently slated to launch on April 24. Thisfollows a delayof its planned launch late last year, in order to give priority to amilitary payload for a United Launch Alliance Atlas 5 rocket.

"Thisis the culmination of four years of hard work by everyone on the LRO Project,"said Cathy Peddie, LRO deputy project manager at NASA's Goddard Space FlightCenter in Maryland. "LRO now begins its launch site processing, where itwill be prepped for integration with our sister mission LCROSS, and eventuallyencapsulated in the Atlas 5 for its journey to the moon."

Afterlaunch, the LCROSS spacecraft and the Centaur upper stage of its Atlas 5 rocketare designed to fly by the moon and enter into an elongated orbit to positionthe spacecraft for impact.

Onfinal approach, the spacecraft and Centaur will separate, with the Centaurstage expected to strike a pre-selectedlunar crater, creating a debris plume that should rise above the surface.Four minutes later, LCROSS would fly through the debris plume, collecting andrelaying data back to Earth before striking the moon's surface and creating asecond debris plume. Scientists will use data from the debris clouds todetermine the presence or absence of water ice.

Thepolar regions of the moon are the main focus of the mission because continuousaccess to sunlight may be possible and water ice may exist in permanentlyshadowed areas of the poles.