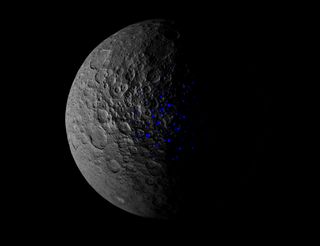 Ceres' northern hemisphere, when the axial tilt is 2 degrees — the minimum experienced by the dwarf planet during its trips around the sun. Regions that remain in shadow are shown in blue. The illumination shown is for the northern solstice, which is when the north pole is most illuminated.
(Image: © NASA/JPL-Caltech/UCLA/MPS/DLR/IDA)

The location of newfound water-ice deposits on Ceres is linked to wild swings in the dwarf planet's tilt over the eons, a new study suggests.

Ice on Ceres — the largest body in the main asteroid belt between Mars and Jupiter — survives in permanently shadowed regions that don't receive sunlight. But these regions change drastically over a period of just 24,500 years, researchers determined.

Ceres' tilt relative to the plane of its path around the sun changes tenfold, from 2 degrees to about 20 degrees, in that time. The dwarf planet's current tilt, also known as obliquity, is 4 degrees; by contrast, Earth's tilt (which is responsible for the seasons) is 23.5 degrees. [Amazing Photos of Dwarf Planet Ceres]

"We found a correlation between craters that stay in shadow at maximum obliquity, and bright deposits that are likely water ice," study lead author Anton Ermakov, a postdoctoral researcher at NASA's Jet Propulsion Laboratory (JPL) in Pasadena, California, said in a NASA statement. "Regions that never see sunlight over millions of years are more likely to have these deposits."

The last time Ceres reached its maximum tilt was 14,000 years ago. When the tilt of Ceres is at a minimum, which is close to the conditions happening right now, there are large portions of the dwarf planet — roughly 800 square miles (2,000 square kilometers) — that don't receive direct sunlight, most of which are near the poles, study team members said.

But when Ceres' tilt gets closer to 20 degrees, the regions protected from sunlight diminish to just 0.4 to 4 square miles (1 to 10 square km). Those regions that remain in shadow even during maximum obliquity could be the same areas that maintain surface ice, the researchers said.

The new study used data from NASA's Dawn spacecraft, which has been orbiting the 590-mile-wide (950 km) Ceres since March 2015, to take measurements of the dwarf planet's shape and gravity, and to try to reconstruct its history. It focused on polar craters and looked at how the shadowing shifts in these regions as Ceres' axial tilt changes.

The researchers found that, in the northern hemisphere, only two of the persistently shadowed regions that exist today will still be dark when Ceres reaches a 20-degree tilt. Both regions have bright deposits today, which could indicate water ice. Two persistently shadowed regions are also present in the southern hemisphere, and one of those regions has a bright area, the researchers said.

In 2016, a study that analyzed Dawn data indicated that there is bright material in 10 craters on Ceres. Dawn's Visible and Infrared Mapping Spectrometer determined that one of these regions contains water ice.

Ceres isn't the only spot in the solar system known to have permanently shadowed regions on its surface; Mercury and Earth's moon also have these zones. However, Ceres has much more variability in its tilt because it is not stabilized by the sun (as Mercury is) or a planet (as Earth's moon is), the researchers said.

While scientists believe that Mercury and Earth's moon both received most of their surface water from small, impacting asteroids and comets, there is more debate regarding Ceres. The European Space Agency's Herschel Space Observatory detected a tenuous water atmosphere around the dwarf planet in 2012 to 2013. This means that the ice could come from water falling back from Ceres' atmosphere, scientists have said, though the stuff could also come from small impactors.

"The idea that ice could survive on Ceres for long periods of time is important as we continue to reconstruct the dwarf planet's geological history, including whether it has been giving off water vapor," study co-author and Dawn deputy principal investigator Carol Raymond, also of JPL, said in the same statement.