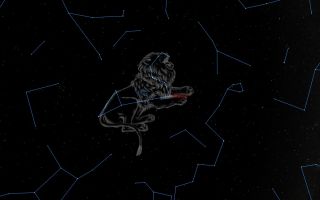 Scattered throughout our sky are distinctive patterns of stars that stand out and are readily identifiable at a glance. The Pleiades, also known as the Seven Sisters, are one example. The three-star belt of Orion, the Mighty Hunter, is another.

Then there is the zigzag row of five stars that can resemble the letter W, the letter M or the number 3, depending on the time of year: Cassiopeia, the Queen.

And this week, if we cast a glance high toward the south-southeast around 10 p.m. we can see another very distinctive pattern: six stars arranged in the shape of a backward question mark, better known as the Sickle, which mark the head, flowing mane and chest of Leo, the Lion. Follow a slightly curved line south from the two stars in the bowl next to the handle of the Big Dipper to find it. [14 Best Skywatching Events of 2017]

To the left of the Sickle is an easily recognized right triangle of stars that marks the Lion's hindquarters and tail. According to legend, Leo used to have a fine tuft of hair on the end of his tail, but it was stolen by an Egyptian priest, and now the tail is bald and ends abruptly

Considering how both the Sickle and the triangle appear in the sky, we have a truly grand constellation portraying the lion; indeed, the appearance of the Sickle high in the east at dusk this time of the year is a signal that winter is passing. The brightest of the six stars is Regulus, at the end of the handle. Regulus is bluish-white in color, and it ranks at the bottom of the list of the 21 brightest stars in the sky — but it is still about twice as bright as Polaris, the North Star.

Regulus is 79 light-years from the sun, which means that when you see it in tonight's sky you're seeing light that started speeding toward Earth back in 1939. The star is 3.8 times more massive and 288 times more luminous than the sun. Regulus was one of the four "royal stars" that ancient Persians said ruled over the four quarters of the heavens. Regulus, of course, was the star that ruled over the spring. Regulus is also positioned almost directly on the imaginary line of the sky marking Earth's path around the sun, known as the ecliptic, and thus Leo is one of the 12 signs of the zodiac.

The second brightest star in the Sickle is Algieba. A single point of light to the naked eye, it's a splendid and colorful second-magnitude binary star — a tightly orbiting two-star system — as any telescope of moderate size will clearly show. One component appears as orange-red, and the other is greenish-yellow. Both stars are giants, respectively 23 and 10 times the diameter of the sun, and take about 500 years to revolve around each other.

In the triangle, the brightest star is second-magnitude Denebola. The star is Leo's second brightest overall, and it marks the tip of the Lion's tail.

Once upon a time — a summertime marker

These stars became associated with the king of the beasts around 5,000 B.C., when Chaldean astronomers in ancient Mesopotamia charted the position of the sun with remarkable accuracy. The astronomers noted that these stars appeared to coincide with the sun's position at the summer solstice. To these ancient skywatchers, it seemed that if the sun shone with exceptional heat and light at this particular place in the zodiac, then the stars among which the sun was located must be fiery and powerful, as well. Certainly, they thought, it must be those stars' influence that strengthened the sun.

The lion was always considered to be the strongest and most kingly of all the animals that roamed Earth, and it had a propensity to roam in the tropical regions of Earth, showing a preference for hot weather. So the lion seemed to have earned a special place in the zodiac.

Regulus will show itself during the eclipse

The sun appears to nearly coincide with the position of Regulus each year on Aug. 22. Obviously, we can't see Regulus for at least a couple of weeks on either side of this date because of the sun's brilliant light. But if you're planning to be within the path of the total eclipse of the sun on Aug. 21, make sure to have binoculars with you and train them on the sun during those precious moments when it's completely obscured. (Until the sun is totally obscured by the moon, you must use eye protection.)There, along with the sun's darkened disk and magnificent pearl-colored corona, you will see a bright star shining to the upper left of the sun in the semidarkness of totality.

That will be Regulus.

It reminds me of something the late science fiction and popular science writer Isaac Asimov shouted out when viewing his first total eclipse from a passenger ship that was docked off Africa in June 1973. In his autobiography, "In Joy Still Felt" (Doubleday and Co., 1980), he wrote:

"There were people there with tape recorders, and I was allowed, afterward, to listen to the deathless prose that issued from my lips. One exclamation was, 'Yes, that's it. That's it. That's the way it's supposed to look,' as though I were congratulating the cosmic director who was running the show. The other, when the brighter stars began to be visible was, 'That proves it. The stars do shine in the daytime.'"