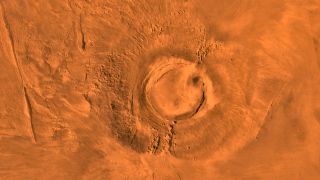 This digital-image mosaic of Mars' Tharsis plateau shows the extinct volcano Arsia Mons. It was assembled from images that the Viking 1 Orbiter took during its 1976 to 1980 working life at Mars.
(Image: © NASA/JPL/USGS)

Around the same time that the dinosaurs became extinct on Earth, a volcano on Mars went dormant, NASA researchers have learned.

Arsia Mons is the southernmost volcano in a group of three massive Martian volcanoes known collectively as Tharsis Montes. Until now, the volcano's history has remained a mystery. But thanks to a new computer model, scientists were finally able to figure out when Arsia Mons stopped spewing out lava.

According to the model, volcanic activity at Arsia Mons came to a halt about 50 million years ago. Around that same time, Earth experienced the Cretaceous-Paleogene extinction event, which wiped out three-quarters of its animal and plant species, including the dinosaurs. [Photos: Mars Volcano Views Revealed by Spacecraft]

Jacob Richardson, a postdoctoral researcher at NASA's Goddard Space Flight Center in Maryland and co-author of the new study, presented the findings today (March 20) at the 48th annual Lunar and Planetary Science Conference, The Woodlands, Texas.

"We estimate that the peak activity for the volcanic field at the summit of Arsia Mons probably occurred approximately 150 million years ago — the late Jurassic period on Earth — and then died out around the same time as Earth’s dinosaurs," Richardson said in a statement. "It’s possible, though, that the last volcanic vent or two might have been active in the past 50 million years, which is very recent in geological terms."

Richardson and his team identified 29 volcanic vents on Arsia Mons. These vents are located inside the caldera — the crater-shaped depression on top of the volcano. Calderas form when volcanoes collapse under their own weight as lava accumulates on top. The caldera on Arsia Mons, which is big enough to hold at least all the water in Lake Huron, measures 69 miles (110 kilometers) across.

To figure out when the volcano was last active, Richardson and his team used high-resolution images from Context Camera on NASA's Mars Reconnaissance Orbiter to map lava flows around the 29 vents. Tallying craters around the volcano helped them to determine how long the lava flows had been there. Combining this data, the researchers determined that the most recent volcanic activity occurred 10 to 90 million years ago. The oldest lava flows are about 200 million years old.

"Think of it like a slow, leaky faucet of magma," Richardson said. "Arsia Mons was creating about one volcanic vent every 1 to 3 million years at the peak, compared to one every 10,000 years or so in similar regions on Earth."

The results of the study were published in January in Earth and Planetary Science Letters.