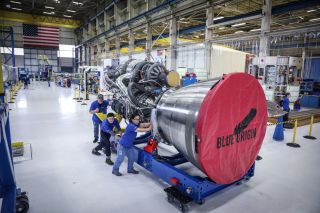 Blue Origin’s first assembled BE-4, the engine that will power the company’s huge New Glenn rocket, is rolled across the factory floor.
(Image: © Jeff Bezos/Blue Origin)

Blue Origin has revealed the first assembled engine that will power the spaceflight company's next-generation megarocket.

"1st BE-4 engine fully assembled. 2nd and 3rd following close behind," Bezos, who is also the billionaire founder of Amazon.com, wrote in one tweet.

The BE-4, which burns liquid oxygen and liquid methane, will get New Glenn off the ground. Seven of the engines will power the rocket's first stage, and its second stage will use one BE-4. Blue Origin is also working on a three-stage New Glenn variant, whose upper stage will incorporate one BE-3, the engine that powers the company's New Shepard suborbital flight system.

New Glenn's first stage will fly back to Earth for a soft touchdown, in keeping with Bezos' plan to develop and employ reusable rockets. Both Bezos and SpaceX CEO Elon Musk say that such technology will slash the cost of spaceflight, helping to open up deep-space locales to exploration. (New Glenn's upper stages will be disposable.)

Testing on the BE-4 will begin soon, and the engine should be ready for flight by 2019, Blue Origin representatives have said. New Glenn — which takes its name from the late astronaut John Glenn, who in February 1962 became the first American to orbit Earth — will make its debut launch in 2020, if everything goes according to plan, Bezos has said.

Blue Origin has already lined up two customers for New Glenn; both France-based Eutelsat and U.S.-based OneWeb have agreed to launch satellites aboard the rocket, Bezos announced this week.

The BE-4 will also be used by the Vulcan rocket, which is being developed by United Launch Alliance, a joint effort of Lockheed Martin and Boeing.