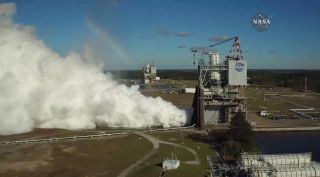 A rainbow graced NASA's first engine test of 2017 for its powerful Space Launch System (SLS) rocket, which is expected to bring astronauts out past Earth orbit in the coming decade.

The Feb. 22 test of the RS-25 engine ran as scheduled for 6 minutes and 20 seconds. It took place at the A-1 test stand at NASA's Stennis Space Center in Mississippi.

SLS is expected to make its first uncrewed flight in September 2018, which will include orbiting the moon and releasing several cubesats to do studies. A crewed test of the rocket with its Orion spacecraft could come as early as 2021. (Recently, NASA officials launched a study about whether crew could ride on the first SLS test flight.)

The video of the engine test shows several views of the engine steam pouring out of the nozzle and floating into the sky. In aerial footage from a drone, a rainbow shines near the stand. There are also close-up shots showing the development engine at work.

The RS-25 engines being used for the first four Orion flights are the same type as the ones that were used on the space shuttle, NASA's human-rated spacecraft from 1981 to 2011.

"The test represents another step forward in development of the rocket that will launch humans aboard Orion deeper into space than ever before," NASA officials said in a statement on YouTube.

"Engineers are conducting an ongoing series of tests this year for SLS on both development and flight engines for future flights to ensure the engine, outfitted with a new controller, can perform at the higher level under a variety of conditions and situations," they added.

Besides testing the engine, Stennis is creating a B-2 test stand that will put the core stage for the first SLS flight through its paces. When that happens, the flight stage will be installed on the stand and tested with four RS-25 engines at the same time, simulating the conditions for launch.