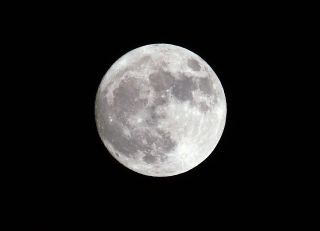 The "supermoon" of Nov. 13, 2016, as seen from the campus of the University of California, Los Angeles.
(Image: © Mélanie Barboni)

Soon, a tiny satellite will start beaming home live, high-resolution views of the moon for all the world to see, 24 hours a day, if all goes according to plan.

The startup Lunar Station aims to launch a cubesat called MoonWatcher to Earth orbit early next year and then air webcasts based on the spacecraft's sharp imagery. The company has launched a Kickstarter campaign to help fund the effort and hopes to raise $150,000 by March 12.

DeWitt and his colleagues have already booked a February 2018 flight for MoonWatcher, which measures just 12 inches long by 4 inches wide by 4 inches tall (30 by 10 by 10 centimeters), aboard Virgin Galactic's satellite-lofting LauncherOne system.

Once in orbit, MoonWatcher will provide clear, unobstructed views of the moon, and Lunar Station will broadcast those vistas on a YouTube channel. Videos on this channel will also educate viewers, teaching them about the moon and relaying the latest lunar discoveries, DeWitt said.

MoonWatcher will give viewers an appreciation of "the living moon," capturing footage of meteorite impacts and other processes in real time, DeWitt said. The cubesat will also have a front-row seat for what DeWitt views as the next great space race — humanity's rush to explore the moon, exploit its resources and settle its surface.

The company's vision doesn't end with a single spacecraft, however. Eventually, Lunar Station plans to have a fleet of MoonWatchers operating in a variety of locations, including lunar orbit and two gravitationally stable spots in the Earth-moon system known as Lagrange points 1 and 2.

And the company's longer-term ambitions extend out into the solar system, with tiny satellites providing round-the-clock views of Mars, the Saturn moon Enceladus and the Jovian moons Io and Europa, among other objects, DeWitt said.

"It's not just the moon — it's everywhere," he said. "But you have to start somewhere."

You can read more about MoonWatcher at the project's Kickstarter page here: https://www.kickstarter.com/projects/moonwatcher/moonwatcher-a-24-7-live-video-of-the-moon-for-ever/posts/1807643