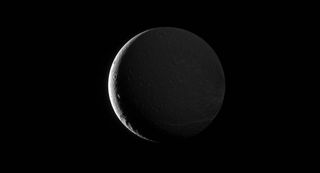 A sunlit face of Dione looks away from Cassini and Saturn nevertheless the dark side of the moon is dimly illuminated by Saturnshine — sunlight reflected by Saturn itself onto Dione. Cassini snapped this image on October 23, 2016 using it's narrow-angle camera.
(Image: © NASA/JPL-Caltech/Space Science Institute)

Saturn's moon Dione is tidally locked to the giant, ringed planet, meaning one side of the moon always faces Saturn. A new image from the Cassini probe captures the inward facing side of Dione, illuminated by sunlight reflected off the planet.

Cassini's narrow-angle camera captured the image in visible light on October 23, 2016. Sunlight brightly illuminates a sliver of the moon on the left side of the image, but the rest of the lunar surface is faintly lit by reflected light from Saturn. Dione measures 698 miles (1,123 kilometers) in diameter, or about three times smaller than Earth's moon.

Earth's moon is also tidally locked, and people sometimes call the side of the moon that faces away from Earth the "dark side," because it's never visible to observers on the ground. But of course, the "dark side" is frequently illuminated by the sun. [Photos: Spectacular Color Maps of Saturn's Moons by Cassini ]

The Cassini-Huygens mission  launched on October 15, 1997, and arrived at Saturn on July 1, 2004. The Huygens probe performed a scheduled crash landing onto Titan on December 24, 2004 (and collected data all the way down), but the lone Cassini probe has been returning data about Saturn, its moons and rings ever since. Cassini began its final  series of maneuvers in late 2016 and will end its nearly 20 year mission in September of 2017 in a death dive into Saturn's atmosphere.

The Cassini mission is a cooperative venture among NASA, ESA (the European Space Agency) and the Italian Space Agency, and total of 17 countries were involved in the project. The Jet Propulsion Laboratory in Pasadena, California, manages the mission. The Space Science Institute in Boulder, Colorado houses the imaging operations center. In all, 33 U.S. states contributed to the production of the orbiter.