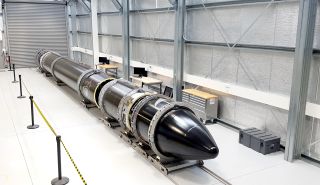 An Electron rocket (named "It's a Test") arrives at Rocket Lab's launch complex ahead of the company's first test flight
(Image: © Rocket Lab)

Rocket Lab expects the Electron rocket, built entirely in-house by the company, to make its first test launch "in the coming months," the company said in a statement. To prepare for that launch date, the first test rocket, named "It's a Test," has arrived at the company's launch facility on the Mahia Peninsula in New Zealand. Over the coming weeks, "a series of tests and checkouts will be conducted at the site before the rocket is signed off to fly," the statement from Rocket Lab said.

"It's an important milestone for our team and for the space industry. In [the] past, it has been countries that go to space, not companies," Peter Beck, Rocket Lab's CEO, said in the statement. [Satellite Quiz:  What's Orbiting Earth?]

The small-satellite industry appears to be blossoming worldwide. The increased capability of small electronics means that these "small sats," some no bigger than a lunch box, can be used for applications like Earth imaging, weather tracking and microgravity experiments.

But generally, these tiny fliers can get to space only by piggybacking on larger payloads. The Electron rocket's diminutive size means small satellites take higher priority. So a company looking to put a few small satellites into a particular orbit can buy a trip on Electron instead of waiting around to hitch a ride on a large rocket that's sending a payload into a similar orbit. Because Rocket Lab owns its launch facility, the company also has more control on the time and cadence of launches, Beck told Space.com in 2016. Right now, launches will cost about NZ $7.6 million (about U.S. $5.5 million at current exchange rates), and Beck would like to eventually launch an Electron rocket about once per week, he said.

Beck said that the company is "laser-focused" on the straightforward goal of more affordable and more frequent rocket launches for people who want to get small satellites into orbit. He said the company is on track to make its first customer launches in 2017.

The Electron carries a maximum payload of about 500 lbs. (225 kilograms). There are other companies working to build rockets in this same weight class (with payloads of less than about 1,100 lbs., or 500 kg). NASA has purchased small-satellite launches from three companies, including Rocket Lab, and these missions are expected to launch in 2018.

Rocket Lab has already secured contracts with private customers, including two launches with the company Moon Express, that will use the Electron to send what could be the first private spacecraft to land on the surface of the moon.