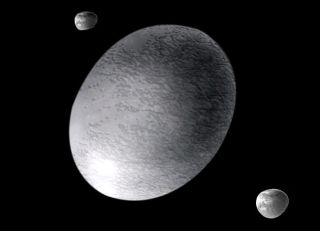 2003 EL61 is a dwarf planet located in the Kuiper Belt that is more than half the size of Pluto and shaped like a squashed American football. A new study finds that an ancient collision shattered it into several fragments, some of which became comets that might have found their way to Earth.
(Image: © NASA, ESA, and A. Feild (STScI))

Shiny, gray space boulders floating in the outskirts of the solar system are the remnants of an ancient fiery collision involving two massive objects, the larger of which was nearly the size of Pluto, scientists say.

This rocky goliath could one day cross the orbit of Neptune and become one of the biggest comets ever known.

The findings, detailed in the March 15 issue of the journal Nature, mark the first "collisional family" detected in the Kuiper Belt and provide new insights about the solar system's murky history.

The Kuiper Belt is a vast expanse of space located beyond the orbit of Neptune. It is littered with rocky and icy bodies believed to be vestiges of the primordial disk from which the planets formed.

The parent body of the new collisional family is thought to be 2003 EL61, one of the largest objects in the Kuiper Belt. It currently is football-shaped [image], with a diameter of about 930 miles (1,500 kilometers), but was probably spherical and 20 percent larger before the collision, the researchers say. Pluto is about 1,400 miles (2,300 km) wide.

2003 EL61 is thought to have collided with an object in its distant past that was roughly half its size and traveling at nearly 7,000 mph. The amount of energy generated by the blast would have equaled about 10 billion nuclear bombs, said study team member Darin Ragozzine of Caltech.

"In terms of collisions in the solar system, that's actually kind of mild," Ragozzine told SPACE.com.

The impact blasted large icy chunks from 2003 EL61 into space and sent the parent body reeling, causing it to spin end-over-end every four hours.

"It spins so fast that it has pulled itself into the shape of an American football, but one that's a bit deflated and stepped on," said Michael Brown, a Caltech planetary scientist who led the study.

The impact spawned at least seven other rocky objects-and likely more-with diameters ranging from 6 to 250 miles (10 to 400 km). The researchers lumped the scattered objects into a family based on their matching gray color and evidence of surface water ice derived from spectral analyses.

"None of the rest of the Kuiper Belt is as shiny and pristine" as these objects are, Ragozzine said.

About 35 other collisional families are known, but they are all located in the asteroid belt, the rocky region of space between the orbits of Mars and Jupiter.

Alessandro Morbidelli, an astronomer at the Laboratoire Cassiopee in France, who was not involved in the study, called the discovery a "milestone in Kuiper Belt science."

Writing in an accompanying Nature news article, Morbidelli said the discovery provides a physical model for astronomers to test their theories about the kinds of large-scale collisions thought to be behind the birth of our Moon and the Pluto-Charon system.

Because such large collisions are relatively rare, scientists think the one involving 2003 EL61 occurred in the distant past, perhaps as far back as 4.5 billion years ago, when the Kuiper Belt was much more crowded than it is now and objects were more likely to bump into one another.

If scientists can pin down when the collision occurred, they will have a unique glimpse into a specific time in the solar system's history and the evolution of the Kuiper Belt, Morbidelli said.

To be a comet

Some of the shards from the impact have made their way to the inner Solar system, the researchers say.

"Probably, there are comets that we have seen that came from this collision," Brown said in a telephone interview. "In fact, there are probably chunks of that collision here on the ground."

One day, EL2003 EL61 will cross the orbit of Neptune and become a comet itself. "That's going to be in about a billion years," Brown said. "It's a ways to wait."