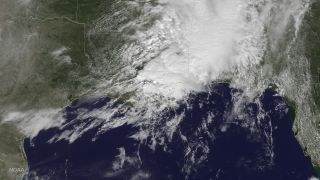 Severe thunderstorms and several tornadoes struck the state of Louisiana on Tuesday (Feb. 7). A weather satellite operated by NASA and the National Oceanic and Atmospheric Administration (NOAA) captured this overhead view of the weather system responsible for the storms.

NOAA's GOES East weather satellite, which provides a constant view of the U.S. East Coast, captured this image of the storms from the satellite's geostationary orbit 22,300 miles (35,800 kilometers) above the Earth.

Thunderstorms that rolled into the southeast on Tuesday morning soon spawned at least seven tornadoes in Louisiana, Gov. John Bel Edwards said in a news conference. One of those tornadoes hit NASA's Michoud Assembly Facility in New Orleans at 11:25 a.m. local time (12:25 p.m. EST/1725 GMT). Five NASA employees were injured, and officials are still assessing the damage. [In Photos: Tornado Damage at Michoud]

No storm-related deaths have been reported in Louisiana, though 31 people reported sustaining injuries, according to a report from Reuters.