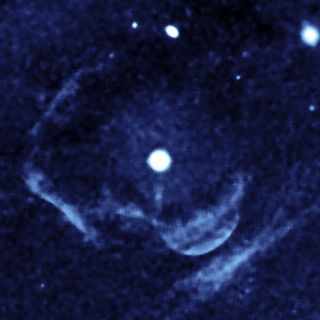 This image, from the far-ultraviolet detector on GALEX, was processed to enhance the appearance of the diffuse emissions from the shell around Z Cam.
(Image: © NASA/JPL-Caltech)

A type of binary star system known to erupt in small frequent explosions every few weeks is now known to occasionally erupt in much bigger, cataclysmic blasts as well every 10,000 years or so, according to a new study.

Images from NASA's Galaxy Evolution Explorer (GALEX) confirmed that a shell of gas detected four years ago is left over from a large explosion of a binary star system called Z Camelopardalis, located some 530 light years away.

Z Cam is a type of dwarf novas that currently experiences small explosions every three weeks or so. The new finding supports a 20-year-old theory-for which data never before existed-that double star systems can go through both large and small explosions rather than just one or the other.

"The new images are the strongest evidence yet in favor of the cyclic evolution of these binary stars," said Michael Shara of the American Museum of Natural History, lead author of a research paper on the finding. "It's gratifying to see such strong evidence for this theory finally emerge after all this time."

In 2003, when Shara's co-author Mark Seibert of the Carnegie Institution was looking at images obtained by GALEX, he noticed an odd arc surrounding Z Cam indicative of a massive gas shell.

The shell appeared to be made up of material ejected from the dwarf nova during a massive classical nova explosion, estimated to have taken place between 2,400 and 240 years ago [enhanced image].

"You could actually see it immediately, but we had to convince ourselves that we were really seeing a nova remnant," Seibert said. "If true, it would represent the largest nova remnant yet known. But it was especially shocking to find it associated with such a diminutive dwarf nova system. Everyone was skeptical and it took a considerable amount of time and effort to be certain."

The shell had never been seen before because it can't be detected at visible wavelengths but is easily seen at the ultra violet wavelengths with GALEX. The researchers confirmed their finding by comparing the structure detected by GALEX with data from several other observatories.

The majority of the stars in the universe have at least one or more companions. The stars of these binary systems are held together by gravity and orbit each other.  Dwarf novas, such as Z Cam, belong to a class of binary systems called cataclysmic variables where one star is a white dwarf-a dense stellar corpse in the last stages of its life-and the other a red dwarf, a small and cool star.

The red dwarf periodically dumps hydrogen-rich matter onto the surface of its dying companion. This process releases gravitational energy, which is then turned to heat and ends up brightening these systems every few weeks or months.

Classical novas, another subclass of cataclysmic variables, erupt due to a sudden but large dump of material from the red dwarf onto the white dwarf. The explosions, therefore, occur less frequently but with such vigor that they are up to a million times brighter than dwarf novas. Classical novas leave behind larger shells of shocked gas.

Shara said that new finding proves a long-standing theory about dwarf novas-that they also exhibit classical nova behavior and explode in a spectacular fashion every 10,000 years or so.

The study was detailed in the March 8 issue of the journal Nature.