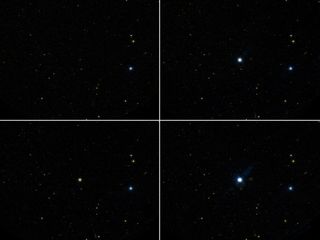 The star GJ 3685A just happened to be in the Galaxy Evolution Explorer's field of view while the telescope was busy observing galaxies. This series of images shows the star flaring in UV light.

MINNEAPOLIS, MN - A telescope designed to study galaxies is picking up dramatic stellar outbursts for free. It also sees the occasional asteroid, satellite, and an assortment of space debris.

The Galaxy Evolution Explorer (GALEX) ultraviolet space telescope was launched in 2003 to investigate how galaxies evolve. The ultraviolet (UV) waveband was thought to be a rather subdued region of the electromagnetic spectrum.

"[GALEX] is finding that the ultraviolet sky is not so quiet," said Barry Welsh of the University of California, Berkeley, at a press conference here at the American Astronomical Society meeting today.

Welsh presented some of the 84 "local" events that the telescope has serendipitously witnessed, including flares, bursts and fast-moving streaks.

"All of these objects are a bonus to astronomers, since the observations come free when the telescope is aimed at distant galaxies," Welsh said.

The telescope has a wide viewing angle - one and a half degrees across, which is roughly three full Moons wide. With so much of the sky being watched, the satellite can't help but catch extra astrophysical phenomena.

Among these chance events are "cosmic streakers" - which can be caused by asteroids, satellites or human-generated space flotsam zipping in front of the telescope.

"Scientists usually throw these away because they muck up their data," Welsh said.

But unlike the usual cameras on other telescopes, GALEX has photon counters, which record the arrival time and direction of individual packets of light. Streakers and other undesirables are easily separated from the targeted data.

Walsh showed several time-elapsed movies from GALEX's photon counts. One showed five pieces of space debris flying in formation above the telescope. Another was of the well-known asteroid Kallisto.

More scientifically interesting were observations of distant stars that brightened because of a flare. These huge eruptions on the surface of a star can last a couple of minutes and typically cause 100-fold increase in UV output from the star.

About once every two months, GALEX has spotted a flare going off. One event, which occurred on April 24, 2004, was the largest flare ever recorded in UV light. The star GJ 3685A suddenly became 10,000 times brighter - nearly overloading the telescope.

This flare, which lasted 20 minutes, was about a million times more energetic than our Sun's flares. The star GJ 3685A, which is 45 light years from us, is an old, small star - called a red dwarf. These stars - sometimes referred to as "flare stars - can erupt as often as every few hours.

The satellite records the evolution of flares with a time resolution of 5 hundredths of a second. Like several of the other flares in the GALEX data set, the GJ 3685A event was actually two flares - one following shortly after the other.

Walsh and his colleagues are compiling these fortuitous GALEX flares for future study.