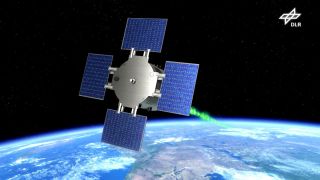 The Eu:CROPIS satellite developed by the German Aerospace Center (DLR), which is scheduled to launch later this year, will rotate around its own axis to simulate the lunar and Martian gravity needed for two greenhouses located inside.
(Image: © DLR)

A satellite that's scheduled to launch later this year will conduct plant-growth experiments in both lunar and Martian gravity, as a way to help prepare for future human settlement of these worlds.

The Eu:CROPIS spacecraft will rotate around its own axis in low-Earth orbit, at an altitude of over 370 miles (600 kilometers). The satellite will initially produce the gravitational force of the moon on its inside for six months, and will then replicate Martian gravity for another six months.

During this time, tomato seeds will germinate and grow into small space tomatoes; 16 onboard cameras will document the plants' progress. [Plants in Space: Photos by Gardening Astronauts]

In addition, microorganisms that are contained in a trickle filter will use synthetic urine to produce fertilizer for the tomatoes. And Euglena microbes will produce oxygen for the system and supply it with protection against excess ammonia, Eu:CROPIS team members said.

LED light will be used to provide the day/night rhythm that the Euglena microbes and tomato seeds require. A pressure tank will replicate Earth’s atmosphere.

"Ultimately, we are simulating and testing greenhouses that could be assembled inside a lunar or Martian habitat to provide the crew with a local source of fresh food," biologist Jens Hauslage of the German Aerospace Center, which is known by its German acronym DLR, said in a press statement.

"The system would do this by managing the controlled conversion of waste into fertilizer," added Hauslage, who heads the scientific part of the Eu:CROPIS mission. (The DLR-led mission's name, by the way, is short for Euglena and Combined Regenerative Organic-food Production in Space.)

Hauslage noted that, in a lunar habitat, for instance, the greenhouse would be located in the astronauts’ "home" in a simulated Earth atmosphere. Urine would be one of the waste products the astronauts would produce in abundance. Here, the plants would have to adapt to reduced-gravity conditions; the gravitational pull on the moon is approximately one-sixth of what it is on Earth, and on Mars it is around one-third.

The satellite, to be lofted by a SpaceX Falcon 9 rocket later this year, will be controlled by the German Space Operations Center, which is operated by DLR near Munich, while the ground station in Weilheim, Germany, among others, will handle communications.

Once Eu:CROPIS and its scientific payload reach space, the first step will be to activate the greenhouse that will simulate a lunar environment. The second greenhouse, with Martian gravity, will be activated six months later.

By this time, the microorganisms and tomato seeds will have been exposed to cosmic radiation for six months — about the same amount of time that it takes to fly to Mars, using current propulsion technology. The DLR Institute of Aerospace Medicine will measure radiation exposure levels inside and outside the satellite throughout the entire mission.

"We are using Eu:CROPIS to space-test technology for use in habitats on other celestial bodies, but it could be installed just as well in a terrestrial setting," Hauslage said.

For instance, trickle filters can be fitted to make manure more effective and less stinky, Eu:CROPIS team members said. Recycling urine in urban settings — for instance, in greenhouses installed in high-rise buildings (vertical farms) — would be another possible use, they added.