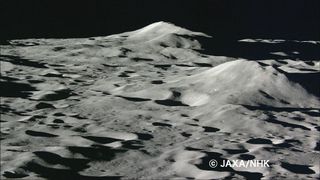 The moon up close as seen by Japan's Kaguya lunar orbiter. Scientists said the probe detected signs of oxygen that came from Earth and was present on the lunar surface.
(Image: © JAXA/NHK)

The moon may carry material produced by life from Earth dating back to when plants first filled the planet's air with oxygen, according to study of data from a Japanese lunar orbiter.

A team led by Kentaro Terada of Osaka University looked at data from the Selenological and Engineering Explorer, better known as Kaguya. The researchers found that a certain kind of oxygen isotope was present in the lunar soil, an isotope that occurs on Earth.

Almost all of the oxygen in Earth's atmosphere for the last 2 and a half billion years came from photosynthesis. That means the moon's rocks have been picking up small amounts of oxygen from living things on Earth; the moon is "contaminated" with the waste products of plants, the researchers said. [The Moon: 10 Surprising Facts]

The Japan Aerospace Exploration Agency (JAXA) launched Kaguya in 2007. The probe completed its mission and crashed into the moon in 2009. The mission was to study the origin of the moon, its surface and the local gravitational environment. Two instruments, the Ion Energy Analyzer (IEA) and the Ion Mass Analyzer (IMA), measured the ions (charged atoms) coming from the moon and the ions in the Earth's magnetosphere.

The moon spends some time in two different environments; for most of its orbit around the Earth, the natural satellite is exposed to the solar wind and picks up ions from that. When the moon passes out of view of the sun, it is in the region where the Earth's magnetic field stretches out onto space, away from the sun (this is called the magnetotail). At those times, charged particles from Earth, and only the Earth, will reach the moon.

The ions get out of the Earth's atmosphere because when sunlight or the occasional cosmic ray hits atoms of oxygen (or any other gas) at the edge of space, those atoms can lose an electron, becoming charged. Earth's magnetic field captures the resulting ions, and some get flung out into space.

Terada told Space.com that the evidence for where the ions came from was the isotope oxygen-16. Earth's upper atmosphere and the moon have relatively little oxygen-16, whereas the solar wind has more. The lunar soil's oxygen content has three components: One is rich in oxygen-16, and that is from the solar wind. Another is poor in oxygen-16, and it wasn't clear where that came from, until the team looked at the data and compared this component to the ions in Earth's atmosphere.

"Interestingly, the isotopic opposition of the unknown [oxygen-16]-poor component of lunar soil is quite identical to that of ozone layer," Terada said.

The third feature is that the ions from the sun are more highly charged. Neutral oxygen atoms have eight protons and eight electrons. Oxygen atoms from Earth usually lose only one electron (and are noted as O+). The ones from the sun are often stripped of more electrons than that; they will be O5+, for instance, meaning the atom lost five electrons. A highly ionized solar oxygen atom would be unlikely to duplicate the behavior of a singly ionized atom from Earth, the researchers said, because the ion from the solar wind would have to regain some of the electrons that got stripped off. It's unlikely that the electrons and the atoms would meet by chance to recombine, the scientists said.

Another piece of evidence that this oxygen came from Earth was how far the ions penetrated into the lunar soil, the scientists said. The ions from Earth fell into the same range as the oxygen ions the team found on the moon: about 1,000 electron volts. Those ions originating from the sun carried much higher energies, and penetrated deeper, the study said.

The research appears in the Jan. 30 issue of the journal Nature Astronomy.