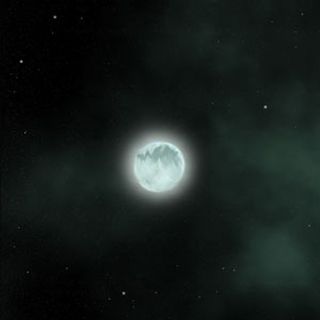 The core of a massive star in a distant galaxy collapses, and deep inside, twin beams of matter and energy begin to blast their way outward.
(Image: © Aurore Simonnet/SSU/NASA E/PO)

The explosive death of a massive starhas broken the record for longest-lived light show. Observations from NASA's Swiftsatellite have revealed a so-called gamma-rayburst for which the afterglow remained visible for more than 125 days.

When a starthat's 10 to 25 times as massive as the Sun checks out, it can release in a matter ofseconds the same amount of energy that the sun will radiate over its10-billion-year lifetime.

Onceejected, these GRBjets slam into nearby interstellar gas, and the resulting collision generatesan intense afterglow that can radiate brightly in X-raysand other wavelengths.

Dubbed GRB060729 for the date of its discovery, the long-lived gamma-ray burst resides inthe constellation Pictor. Swift'sX-ray telescope monitored the afterglow until it faded out, a phenomenonthat typically lasts for a week or two. But the afterglow from this burststarted off so bright and faded so slowly that the telescope monitored it formonths, into late November 2006. In addition to its unprecedented brightness,the long-lived GRBis much closer to Earth than manybursts, which allowed the telescope to pick up the glow for an extended period.

Unlikeother afterglows, the long-lived one showed little drop in brightness over the125 days of observation. The prolonged light output suggests anunderlying engine that pumped energy continuously to the burst.

"Itrequires a larger energy injection than what we normally see in bursts and mayrequire continuous energy input from the central engine," said study teamleader Dirk Grupe, an astronomer of Penn State University.

The centralengine could be a magnetar,a neutron star with a mega magneticfield, the scientists suggest. The magnetic field puts the brakes on themagnetar's rotation. The energy from this spin-down could get converted into magneticenergy that flows into the initial blast wave that triggered the GRBin the first place.

Grupe'scolleague Xiang-Yu Wang, also of Penn State, calculated that this magneticenergy could power an observed afterglow for months.

Theresearch will be published in an upcoming issue of The AstrophysicalJournal.