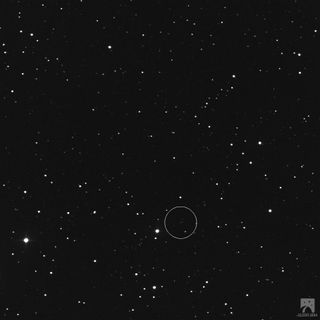 A newfound asteroid about the size of a bus zipped safely by Earth late Tuesday (Jan. 24), just days after its discovery.

The asteroid 2017 BX buzzed by Earth at a range of 162,252 miles (261,119 kilometers) — about 30 percent closer than the distance between the Earth and the moon — at 11:54 p.m. EST (0454 Tuesday GMT), according to online Slooh observatory, which tracked the object late Tuesday in a live webcast at Slooh.com. The asteroid was first discovered Friday (Jan. 20). You can see an animation of the asteroid's orbit here.

Asteroid 2017 BX is between 13 and 46 feet (4 and 14 meters) in diameter, according to an alert by the Minor Planet Center at the Harvard-Smithsonian Center for Astrophysics, which tracks near-Earth objects. An estimate from NASA's Asteroid Watch team pegged the asteroid at about 28 feet (8.5 m) in diameter.

Slooh nicknamed the asteroid “Rerun" after a character portrayed by the late actor Fred Berry on the 1970s show "What's Happening!!" It is the second small asteroid to buzz the Earth this month. (The other asteroid, called 2017 AG13, flew harmlessly by Earth on Jan. 9.)

The asteroid's relatively dim brightness and its speed – a whopping 17,000 mph (27,358 km/h) ― made it difficult for Slooh telescopes to spot.

"I'd put it on the equivalent of an orca, or a killer whale," Slooh astronomer Eric Edelman said during the asteroid webcast. "We're looking for a killer whale floating out in space over 100,000 miles away from us."

Finding the asteroid with Slooh's half-meter telescope in Spain's Canary Islands was "one of the world's most difficult 'Where's Waldo' games," Edelman added.

Asteroid 2017 BX was first spotted by scientists using the Pan-STARRS 1 observatory atop the summit of Haleakala in Maui, Hawaii. Scientists and NASA researchers regularly use observatories like Pan-STARRS 1 to track asteroids and monitor any space rocks that could pose an impact threat to Earth.