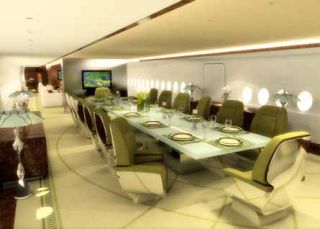 A photograph of the interior office or board room designed for a private client for an AirBus A380 VIP 'Flying Palace'.
(Image: © Edése Doret Industrial Design.)

A U.S.-baseddesign company is nearing completion of an interior design for a prospectivecustomer for the VIP version of the Airbus A380 "Flying Palace" and has released an image to the public.

Airbusrevealed that in February this year an unnamed customer had signed aletter of intent to purchase a VIP A380, although the client is yet to sign a firmorder for the aircraft. The interior design, for an office of dining room, was created by EdeseDoret Industrial Design.

The AirbusA380 superjumbo is a 555-passenger, double-decker jet set to beintroduced into commercial service next year in the United States pending FAAapproval. Aviation officials predict it's just a matter of time until it takesto the skies with all the trimmings of a private palace.

Companypresident Edese Doret says that while the design is nearing completion, it isstill subject to adjustment by the client. "They will most likely makechanges prior to design freeze," Doret said.

While Doretwon't comment on whether the customer is from the Middle East, the imagesclearly show flat-screen moving map monitors carrying Arabic script with Dubai as the origin of a theoretical flightpath.

For the billionaireaviation enthusiast, ownership of a customized Airbus A380 represents treasurebeyond price. And while commercial passengers are likely never to experiencethe deluxe accommodations of the privately owned Airbus A380s of the future itseems some are willing to spread the wealth.

Transportingyour entourage from country X to country Y in time for the next urgentgathering of the great and the good can be a complex undertaking.

When theyfly commercial, billionaires and their fellow travelers must struggle throughseething crowds at airport terminals and wait in long lines for airlinecheck-in and security processing. They sit scrunched like human pretzels intoo-small seats where flight attendants sometimes cannot even provide a drinkof water. Or they do something about it.

Eager tomake their trips as hassle-free as possible, many of these individuals havetaken to flying on private jets. Typically these small airplanes carry betweensix and 20 people, and check-in is handled at the general-aviation section ofan airport. Passenger boarding and disembarkation take place on especiallyreserved areas of the tarmac, and helicopter connections can usually beprovided if required.

Recently,however, a new trend has emerged at the very top of the market: the conversionfor private ownership of much larger--and more expensive--jets that are normallyassociated with commercial airlines. These are planes like the Airbus A319 andA320; the Boeing 737, called the 737BBJ and 757; and even the twin-aislewide-bodies such as the 747, 767 and 777.

All havebeen sold to private customers, including two 767s last year to the founders ofGoogle.

While EdeseDoret Industrial Design's interior has been created for a specific client, LufthansaTechnik, the Germany-based provider of technical support and maintenance forover 300 of the world's airlines and operators, has also designed an AirbusA380 for potential private clients that includes rooms with king-sized beds,deep pile carpeting and en-suite bathrooms; an office with Web and e-mailaccess; a dining room that can be used for entertaining guests or conductingbusiness meetings; and a theater.

Jennifer Coutts Clay is also the author of "Jetliner Cabins" available at jetlinercabins.com and amazon.com. Brian Davidson is based in Switzerland.