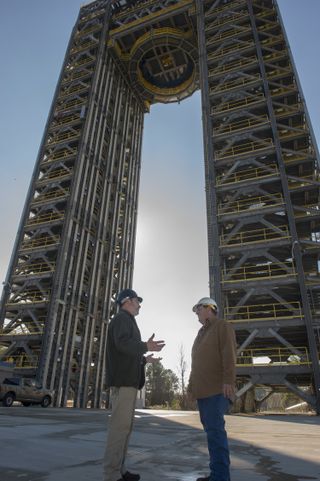 Test Stand 4693 at NASA's Marshall Space Flight Center in Alabama, newly completed, will hold a massive rocket tank as the tank is pushed, pulled and jarred to ensure it's sturdy enough for launch on a Space Launch System rocket.
(Image: © NASA)

A giant rocket-tank test stand rises to the sky in a new video released by NASA. The agency showed off the two-year time lapse as part of an announcement that construction is complete on the stand, which will be used to develop the next-generation Space Launch System (SLS).

SLS is a 321-foot-tall (98 meters) rocket, similar in size to the Apollo moon rocket, that is intended to send astronauts out of Earth's orbit for the first time in decades. NASA plans to test the rocket in a flight to the moon in 2021, and send astronauts on board later in the 2020s, the agency has said.

But first, the massive launch system needs to pass several tests. The new facility, known as Test Stand 4693 and located at NASA's Marshall Space Flight Center in Alabama, is critical to making sure the liquid hydrogen tank for SLS can stand up to launch pressure, NASA officials said in a statement. The 221-foot (67 m) stand is intended to replicate the pushing and pulling that takes place during launch.

"There is no other facility that can handle something as big as the SLS hydrogen tank," SLS engineer Sam Stephens said in the statement.

During testing, a liquid-hydrogen tank test article will be suspended between the towers. All along the tank will be 38 hydraulic cylinders, weighing between 500 and 3,200 lbs. each (between 230 and 1,500 kilograms).

For each test, the cylinders will extend and retract in different combinations to create up to 340,000 lbs. (1.5 million newtons) of pressure. Engineers plan to run 30 or more test scenarios, measuring the strains put on the tank, its temperature changes, and how it stands up to violent pushing and pulling. The tests will also be filmed in high definition.

Nearby this test stand is another one (called Test Stand 4697), where engineers have been testing liquid-oxygen tanks for SLS since the stand was completed in September 2016. Testing is complex and can last up to four months per session, NASA said.