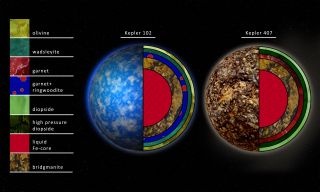 Olivine versus garnet planets: planets whose stars have more silicon than magnesium would have a harder outer core that's less likely to exhibit plate tectonics. Here, a potential planet around the star Kepler 102, whose composition would be more like Earth's, dominated by olivine, and a planet around Kepler 407, which would have a hard, garnet-dominant composition.
(Image: © Robin Dienel, Carnegie DTM)

GRAPEVINE, Texas — Earth's surface is ever-changing, with tectonic plates bumping together to cause earthquakes and volcanoes, grow mountains and replenish and redistribute elements — and that dynamic environment helps life thrive. But with a slightly different ratio of elements in the sun, the planet could have been far less forgiving.

Planets are mostly made of the same stuff as their stars, and researchers have used that fact to simulate two very different rocky planets: one whose upper mantleis mostly the mineral olivine, like Earth's, and one with a stiff upper mantle made of garnet.

According to Johanna Teske, a researcher at the Carnegie Institution for Science, understanding a planet's composition is key to evaluating how Earth-like it might be — how likely it is to have plate tectonics or a protective magnetic field. [The Strangest Alien Planets We Know]

"Whole-star measurements can be made pretty much on any star that we know has a planet, and these help us constrain the initial planet-forming ingredients," Teske said, presenting the new work Thursday (Jan. 5) here at the 229th meeting of the American Astronomical Society. "The composition of a planet controls what type of atmosphere it has and whether it has a climate, clouds, that is in turn affected by and affects tectonics in a planet."

To prove the usefulness of using the star's composition to evaluate the planet, Teske's group took as an example two different stars whose spectra, and therefore their composition, have been measured by the Sloan Digital Sky Survey (SDSS) — Kepler 102, which has a more Earth-like ratio of magnesium to silicon (and is known to have rocky planets), and Kepler 407, whose ratio is about two-thirds less than the sun's.

Cayman Unterborn, a geophysicist and project collaborator at Arizona State University, simulated the formation of rocky planetsaround those stars to see what they might be like. The researchers found that even the small difference in the ratio between the two elements had a drastic effect on the rocky worlds orbiting each star.

"Both of the planets have a liquid iron core, and then a layer of bridgmanite right after the core, but then upper mantle composition is very different," Teske said.

The first planet had an upper mantle made of a type of green crystalline mineral called olivine, which is soft enoughto flow and allow the plates resting above it to move and collide, and the second had an outer core of the less flexible mineral garnet.

"You can see in [the planet formed around] Kepler 407 that there's this red layer of garnet, which we think would prohibit or make less probable plate tectonics in a planet around that star."

The first, in other words, is a potentially Earth-like rocky planet, while the second is likely much more stiff and unmoving. Making this kind of calculation in advance, based only on star composition, can let researchers better determine which might be Earth-like and are worth further study with next-generation observatories like the James Webb Space Telescope, Teske said.

The researchers also checked the modeling process by simulating the formation of a rocky planet around the sun — they found that it very precisely echoed Earth's composition. To push the research further, the team is characterizing potential planets around a number of other stars measured by SDSS that host known rocky planets, and plotting the predicted density of the planets and core masses. Those are values that can be verified by other measurements later on.

"I think this is really exciting work — we're combining astronomy and geology and geophysics," Teske added. "Host star abundances from APOGEE [an SDSS survey] and SDSS really give us an important constraint on the interior compositions of exoplanets…that you really can't get from any other observations."