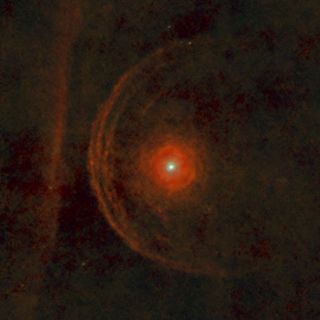 The huge, red star Betelgeuse, which marks the hunter's shoulder in the constellation Orion, may have swallowed up a companion star not long ago, a new study suggests.

Betelgeuse is a "red supergiant" that will soon die in a supernova explosion. As the name of its stellar class indicates, Betelgeuse has bloated immensely as the end of its life has neared. Although Betelgeuse's mass is just 15 to 25 times that of the sun, the star is currently about 860 million miles (1.4 billion kilometers) across, or 1,000 times wider than Earth's star. (If you put Betelgeuse in the sun's location, the red star's surface would extend past the orbit of Mars and into the asteroid belt.)

Such an enormous star should be spinning slowly, since rotation rate decreases as size increases. (Think about how ice-skaters control their spin speed by bringing their arms in close to their body or extending them.) But that's not the case with Betelgeuse, which is rotating at a blazing 33,500 mph (53,900 km/h), astronomers said. [The Brightest Stars in the Sky: A Starry Countdown]

"We cannot account for the rotation of Betelgeuse," study lead author J. Craig Wheeler, an astronomer at the University of Texas at Austin, said in a statement. "It's spinning 150 times faster than any plausible single star just rotating and doing its thing."

But Wheeler and his colleagues may have an answer. Their computer models suggest that Betelgeuse's puzzling spin could be explained if the giant gobbled up a companion roughly the same mass as the sun 100,000 years or so ago. (The angular momentum of the companion's orbit would be transferred to Betelgeuse, speeding up the giant's rotation to its current rate.)

This act of cannibalism likely would have spurred a cosmic belch of sorts, causing Betelgeuse to blast a cloud of material out into space at about 22,400 mph (36,000 km/h), Wheeler said. Indeed, astronomers have spotted a shell of matter at roughly the distance from Betelgeuse that this scenario predicts, he added.

Although there are other possible explanations for this space cloud, "the fact is, there is evidence that Betelgeuse had some kind of commotion on roughly this timescale," Wheeler said.

The new study was published today (Dec. 19) in the journal Monthly Notices of the Royal Astronomical Society.