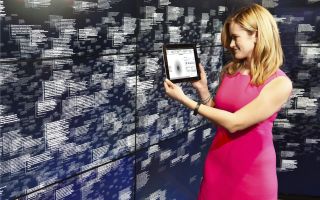 IBM's question-answering whiz, the Watson computer system, famously beat former winners on Jeopardy in 2011 — and now it's digging into aerospace research and data to help NASA answer questions on the frontier of spaceflight science and make crucial decisions in the moment during air travel.

More than 60 years after the first IBM computing machines showed up in the halls of NASA's Langley Research Center, new work at Langley will use IBM tech to help researchers sort through the huge volumes of data that is generated by aerospace research.

"There's so much data out there that consists of unstructured text that usually only humans can make sense of, but the challenge is that there's too much of it for any human being to read," Chris Codella, an IBM Distinguised Engineer who is working on Watson, told Space.com. "The idea here is to have a Watson system that can be a research development advisor to people who work in the aerospace fields." [Forget Jeopardy: 5 Abilities That Make IBM's Watson Amazing]

Watson operates with what IBM calls cognitive computing — essentially, it draws connections after examining huge volumes of data that is fed to it, and it is able to return highly relevant answers within the fields that data encompasses. The system has been used to analyze connections within medical and scientific research documents, make potential diagnoses, invent recipes and analyze people's personality traits through social media posts. (Plus, of course, play Jeopardy! — after the system drew from Wikipedia to help build its knowledge base.)

Watson is able to respond to questions that it is asked in natural language — or as a human would ask another human, as opposed to through search terms — and unlike a search engine, where more information can muddle the results, Watson returns better answers when the user gives it more detail, Codella said. At Langley, the system will return what it ranks as the most relevant passages in its database when a user asks it a question. While human researchers couldn't hope to internalize all the aerospace research out there, Watson doesn't have that limitation.

"That was the initial emphasis here: Have a system that could read it all, make sense of it all," Codella said. "The number of documents Watson could read is in principle unlimited."

Langley played host to a large IBM mainframe in the early 1960s, which was used to calculate complex flight trajectories as NASA made its first forays into human spaceflight. The upcoming new film "Hidden Figures" features the women of Langley learning to program the great machine; mathematician Katherine Johnson famously checked its numbers before John Glenn launched into space, as well. (IBM has a page about the movie and history online.)

At the time, the computer let researchers take on the many complex, ever-changing calculations that were needed to develop rockets and plot their paths. Now, when electronic computers have number wrangling well covered, Watson lets them wrangle the library of research, too.

Watson researchers are also working with NASA to develop a program that provides important information to pilots "on the fly" — during flight, when they need to make quick decisions and don't have time to gather all the information they might need.

"The very first demonstration system we built was meant to surface relevant information to a pilot in flight," Codella said. NASA "tried to recreate an incident that happened in one of the airlines a few years ago and see if Watson could, when given the background information, surface information that would have made a difference, had the pilot known it at the time."

The real flight the scenario was based on landed successfully, Codella added, but the pilot took some actions that could have made the situation worse. During a simulated test, Watson was able to provide information about the aircraft, equipment malfunction and weather conditions that would have led the pilot to a better understanding of the situation.

"It's going after that tidbit of information that might be so highly relevant, that they might not have been aware of in their own experience, that might make the difference in their decision process," Codella said. He added that the next stage of that project will begin in 2017.

IBM's early computers were housed in large rooms on Langley's campus, but Watson operates on servers that communicate with its users remotely, through the cloud. However, there's one situation where that would be particularly inconvenient: in space or on another planet, where time lag and limited bandwidth slow that stream of communication to a trickle.

Codella described another scenario they've discussed with NASA, where a Watson system would be able to diagnose astronauts' illnesses in flight and offer suggestions for treatment. Perhaps the system could even help operate the ship itself, he added. (IBM has also discussed the possibility of Watson directing a rover on Mars.) With the continued miniaturization of computer components, called Moore's Law, the computational power it requires could someday be miniaturized enough for it to find a home in space, Codella said.

Even as the history of humans performing crucial calculations at Langley is depicted on the big screen, in "Hidden Figures," IBM is helping NASA to write a script for the future role of technology at the agency — where Watson helps read and understand huge libraries of data, reconciling contradictory information and weighing all the options before it picks out the crucial details for a given problem.