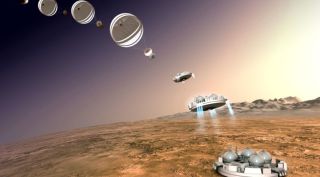 Here's how ESA's Schiaparelli Mars entry, descent and landing experiment should have worked. Instead, an error in its inertial measurement unit infected its navigation system and caused the onboard computer to act as though it had already landed. In fact it was still 3.7 kilometers above the Mars surface.
(Image: © ESA)

PARIS — The European Space Agency (ESA) on Nov. 23 said its Schiaparelli lander’s crash landing on Mars on Oct. 19 followed an unexplained saturation of its inertial measurement unit (IMU), which delivered bad data to the lander’s computer and forced a premature release of its parachute.

Polluted by the IMU data, the lander’s computer apparently thought it had either already landed or was just about to land. The parachute system was released, the braking thrusters were fired only briefly and the on-ground systems were activated.

Instead of being on the ground, Schiaparelli was still 2.3 miles (3.7 kilometers) above the Mars surface. It crashed, but not before delivering what ESA officials say is a wealth of data on entry into the Mars atmosphere, the functioning and release of the heat shield and the deployment of the parachute — all of which went according to plan. [In Photos: Europe's Schiaparelli Mars Landing Day]

Awaiting a December go-ahead for ExoMars 2020

Schiaparelli was never intended to survive more than a few days on the Mars surface, but the crash-and-die scenario has nonetheless made for bad press in Europe, raising concern that ESA governments might struggle to find the 300 million euros ($330 million) needed to finish funding a 2020 mission with Russia.

That mission is the second half of the ExoMars program. The first half’s main component is the Trace Gas Orbiter (TGO), which was successfully placed into Mars orbit and is functioning well. It will begin a series of maneuvers to reach is operational orbit at the end of 2017.

In addition to taking readings from the Mars atmosphere, the orbiter will be used to relay data from the European-built rover vehicle that is the showcase payload for the 2020 mission, to be launched by Russia. Russia is providing a landing package for that mission.

ESA governments are scheduled to meet Dec. 1-2 in Lucerne, Switzerland, to decide on a three- to five-year spending package covering most of the agency’s programs. But ExoMars will be one of the hot topics, as not all member states are eager to invest more in it.

Government officials said ESA is in fact missing about 400 million euros but would ask its member states for 300 million and find the remaining funds from within ESA's existing budget. It was not clear where those funds would be found.

The Italian Space Agency (ASI), which is ExoMars’ lead sponsor at ESA, has said the fate of the Schiaparelli lander has not dimmed its enthusiasm for ExoMars and that it would finance its expected 40 percent of the ExoMars package.

"ExoMars is extremely important for European science and exploration," ASI President Roberto Battiston said in a Nov. 23 statement. "Together with all the participating states in the program, we will work towards the successful completion of the second ExoMars mission."

The Russian space agency, Roscosmos, has also said it sees no reason to scrap the 2020 mission just because of a computer error that tarnished the lander mission’s last moments.

A one-second glitch and a 3,700-meter freefall

In its Nov. 23 statement, ESA said the saturation reading from Schiaparelli’s inertial measurement unit lasted only a second but was enough to play havoc with the navigation system.

"[T]he erroneous information generated an estimated altitude that was negative," ESA said. "That is, below ground level. This in turn successively triggered a premature release of the parachute and the back shell, a brief firing of the braking thrusters and finally activation of the on-ground systems as if Schiaparelli had already landed.

"In reality, the vehicle was still at an altitude of around 3.7 kilometers."

ESA said the sequence of events "has been clearly reproduced in computer simulations of the control system’s response to the erroneous information."

ESA’s director of human spaceflight and robotic exploration, David Parker, said in a statement that ExoMars teams are still sifting through the voluminous data harvest from the Schiaparelli mission, and that an external, independent board of inquiry, now being created, would release a final report in early 2017.