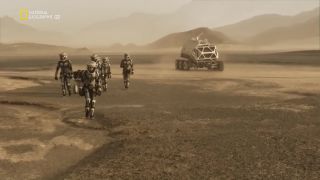 The first people to step foot on Mars will face steep challenges and potentially deadly situations. In last night's (Nov. 21) episode of "Mars," the National Geographic Channel's six-part docudrama, five crewmembers fight for their lives after landing on the Red Planet. Here's what went down in the new episode of "Mars." (Note: contains spoilers!)

In the fictional half of the docudrama, the first Mars colonists have just arrived in their new world, in the year 2033. Viewers who tuned in for the television debut of "Mars" last week (Nov. 14) may recall the nail-biting scenes in which the Daedalus crew struggles to safely land its spacecraft near its pre-built Martian base camp. The crewmembers make it to Mars alive — for now — but are a whopping 75.6 kilometers (46.8 miles) away from camp.

Though the Daedalus spacecraft, which is designed like SpaceX's reusable rockets, was built to be able to lift off and land again, there isn't enough fuel left to restart the engines and hop on over to base camp. ['Mars': An Epic National Geographic Channel Miniseries in Pictures]

Thankfully the crewmembers are able to remotely drive a nearby rover to the landing site to pick them up and carry them to their new home. Unlike the dune buggies that Apollo astronauts used to drive around on the moon, this Mars rover is a closed, pressurized vehicle made for comfortably transporting multiple people and loads of cargo supplies. This concept for a crewed rover has never been tested, but NASA has come up with similar designs for roving on the moon.

The Daedalus crew loads up the rover with as much cargo from the spacecraft as possible and begins the bumpy, 15-hour-long drive to the explorers' soon-to-be Mars colony. With all the supplies and crew on board, the rover is 2,000 kilograms (4,400 lbs.) over its maximum payload capacity. Instead of dropping some cargo to lighten the load, the crew decides that its cargo is worth the added risk, and the crewmembers begin roving to their new home at a steady crawl of no faster than 9 mph (15 km/h).

During the ride to base camp, it becomes clear that Cmdr. Ben Sawyer, played by actor Ben Cotton, has sustained serious injuries during the landing of the Daedalus spacecraft. Up to that point, Sawyer had hidden the severity of his injuries from his crewmates to avoid becoming a distraction during the trek to base camp. But there's no hiding his ailments now. Sawyer begins to experience delusions, before fainting and even coughing up blood.

In the nonfiction segments of the show that take place in 2016, NASA officials and other space experts discuss the stress that the human body would endure while traveling to and living on Mars. Astronaut Scott Kelly, who recently spent a year in space aboard the International Space Station (ISS), stars in the present-day portion of this episode of "Mars." Kelly's yearlong mission was designed to help NASA understand the effects that living in space for an extended time has on the human body and psyche. But learning what happens to the human body after one year at the ISS barely begins to scratch the surface of what could happen to a person living on Mars.

Scientists have only begun to figure out how weightlessness and higher levels of radiation affect things like bone density, muscle mass, coordination and eyesight. There's a lot scientists still don't know about how space can affect other things like the cardiovascular and respiratory systems. To this day, Kelly still doesn't know all of the ways that spending a year in space changed his body, he says. To him, the risk of participating in this type of research is worth the reward. "We have to go to Mars," Kelly says in the episode. "It'll require more sacrifice, more radiation, more risks, more time away [from home]. ... I'd still do it, though." [The Human Body in Space: 6 Weird Facts]

Astrophysicist and talk show host Neil deGrasse Tyson explains that, at first, Mars "feels like Earth, but you dig a little deeper, [and] it's very cold there, very dry there. You can't breathe the air," Tyson says. "It is more hostile to life than any place on Earth."

"We knew Mars wouldn't welcome us," Cmdr. Ben Sawyer says at the beginning of the episode.

It doesn't take long for the Daedalus crew to learn just how hostile Mars can be. Their slow, rocky ride to camp is abruptly cut short when the rover's rear suspension breaks after hitting too big of a bump in the road. To fix it, they'll need to get to a 3D printer and print spare parts. But with the commander's health in jeopardy, there's no time to repair the rover. Instead, the crewmembers charge their battery-powered spacesuits and continue on foot.

Now they're 10 miles (16.2 km), or about a 4-hour walk, from base camp. It's -35 degrees Celsius (-31 degrees Fahrenheit), and by nightfall, the temperature will be down to -70 degrees C (-94 degrees F). The spacesuits keep their bodies pressurized and at a healthy temperature while supplying breathable air. But the suits have limited battery life, and these essential functions shut down one by one as the battery depletes.

Before the Daedalus crewmembers make it to base camp, their spacesuit batteries run so low that the suits cease thermoregulation and the crew nearly freezes to death. At 2 percent battery, the suits stop scrubbing carbon dioxide from the air supply, so the crew begins to suffocate. The crewmembers make it to base camp barely in time to avoid dying in the harsh Martian environment — even Cmdr. Ben Sawyer makes it there alive.

Sawyer may have survived the arduous trek to his new home, but his injuries from the landing took too big of a toll on his health. With the medical equipment available at base camp, Dr. Amelie Durand attempts to save Sawyer's life by surgically draining the blood from the commander's lung, only to discover a ruptured spleen. Throughout the episode, Durand is hopeful that getting Sawyer to base camp will allow her to save the commander's life, but by the time they arrived, Sawyer is too far gone. He dies a hero on the operating table.

Now Hana Seung, the mission pilot and software engineer, must take over as commander of the Daedalus crew. In next week's episode of "Mars," we'll see how the crew copes with the loss of its commander and moves on to creating a permanent settlement on the Red Planet.