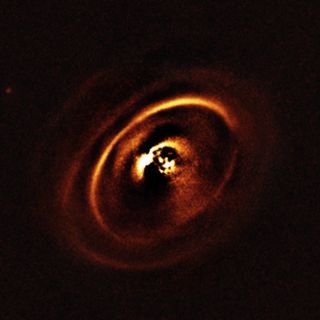 The disk of dust and debris forming into a planetary system around the young star RX J1615, 600 light-years from Earth in the constellation Scorpius, is shown here, imaged by the SPHERE instrument on ESO's Very Large Telescope in Chile. The system appears to be just 1.8 million years old.
(Image: © ESO, J. de Boer et al.)

A trio of planet-forming swirls have been imaged around young stars, revealing the baby pictures of three faraway systems.

The images come from the SPHERE (Spectro-Polarimetric High-contrast Exoplanet Research) instrument on European Southern Observatory's (ESO) Very Large Telescope in Chile. That instrument, which went live in 2014, is sensitive enough to explore the complex interplay between the disks of dust and gas that surround young stars, called protoplanetary disks, and the newborn planets forming within them.

"The interaction between protoplanetary discs and growing planets can shape the discs into various forms: vast rings, spiral arms or shadowed voids," ESO officials said in a statement. "These are of special interest as an unambiguous link between these sculptures and the sculpting planets is yet to be found; a mystery astronomers are keen to solve." [Amazing Space Views of ESO's Very Large Telescope (Photos)]

Papers describing SPHERE's look at all three systems, pictured above, have been accepted for publication in the journal Astronomy & Astrophysics. The images all have dark spots at their center, where the instrument blocked out the stars' bright glow to reveal the structure around them.

The first of the three systems is the young star RX J1615, which is located in the constellation Scorpius 600 light-years from Earth. It sports a Saturn-like set of concentric rings. According to the statement, such a symmetrical configuration is unusual; most disks that have been seen previously have shown asymmetrical figures or spiral arms. The star system seems to be only 1.8 million years old, with planets still forming, officials said in the statement. The new research is online here.

SPHERE's imaging of the second system, HD 97048 (at right in the photo set, online here), revealed four distinct, previously unseen rings — which are also surprisingly symmetrical. That system is in the constellation Chamaeleon, 500 light-years from Earth.

Finally, the third image (at center) reveals a more typically asymmetrical — but still striking — disk around the star HD135344B, which is about 450 light-years from Earth. The new research, online here, shows two tightly wound spiral arms that were likely created by one or more massive protoplanets outside the disk — those worlds are likely developing towards Jupiter-like stature, officials said in the statement. The researchers also spotted four dark shadows in the disk; one of them even changed during the months between observations, showing that the system is evolving before the researchers' eyes.

The fine detail in these stellar baby pictures is helping researchers to understand how planets in the process of forming can sculpt the disks of material they orbit within, officials said in the statement.