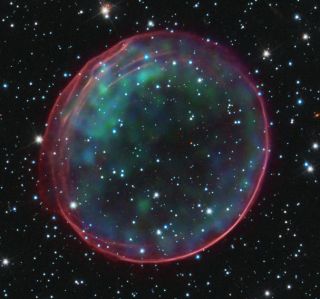 The universe may not be expanding at an accelerating rate after all, meaning that mysterious "dark energy" might not actually exist, according to a new study.

This is quite the claim. In 2011, three cosmologists from two research teams won the Nobel Prize in physics for independently showing that distant Type Ia supernovas, which are a kind of exploding star, are moving away from Earth faster than nearby ones are.

These surprising results, which were published in the late 1990s, strongly suggested that some strange force must be spreading space-time apart. If no such force exists, the reasoning goes, then the expansion of the universe that began with the Big Bang 13.8 billion years ago should not be accelerating. Instead, it should be decreasing, slowed by the collective gravitational pull of all the galaxies, black holes and other matter in the cosmos. [Dark Energy: The Mystery Explained (Infographic)]

This hypothetical dispersive force came to be known as dark energy, because astronomers didn't really know what it was (and still don't, as a matter of fact).

But the new study, which was published online Friday (Oct. 21) in the journal Scientific Reports, questions this Nobel Prize-winning conclusion. Lead author J.T. Nielsen, of the Niels Bohr Institute at the University of Copenhagen in Denmark, and his colleagues analyzed 740 Type Ia supernovas using a different theoretical framework than the one that the two research teams employed in the 1990s. (The previous work also looked at just 70 or so Type Ia supernovas, Nielsen's team pointed out.)

The new analysis found just "marginal evidence" for the concept of dark energy and accelerating expansion.

"The evidence for accelerated expansion is, at most, what physicists call '3 sigma.' This is far short of the 5-sigma standard required to claim a discovery of fundamental significance," co-author Subir Sarkar, of Oxford University in England, said in a statement.

"So it is quite possible that we are being misled, and that the apparent manifestation of dark energy is a consequence of analyzing the data in an oversimplified theoretical model — one that was in fact constructed in the 1930s, long before there was any real data," Sarkar added.

Sarkar acknowledged that "a lot of work will be necessary to convince the physics community" that this latter possibility could actually reflect reality. This appraisal seems to be accurate; there has indeed been pushback from other astronomers.

One skeptic is Paul Sutter, an astrophysicist at The Ohio State University (and a contributor to Space.com's "Expert Voices" section). For starters, Sutter thinks that Nielsen et al. shouldn't be so dismissive of the statistical link that they found.

"I don't know, 3 sigma is pretty great to me," he told Space.com. "Their paper very clearly points to a universe with dark energy."

While Sutter agreed with Sarkar that a 3-sigma detection is not entirely convincing by itself, he stressed that the motion of Type Ia supernovas is far from the only evidence supporting the existence of dark energy. Sutter cited, among other things, oscillations in the cosmic microwave background (the ancient light left over from the Big Bang); observations of large-scale structure in the universe; and "baryon acoustic oscillations," which are odd fluctuations in the density of matter.

"If we had a universe with no dark energy, those features would have disappeared long ago," Sutter said. "We have scads of evidence — multiple and independent probes — that all point to a universe with dark energy. And the authors [of the new study] try to just kind of hand wave this stuff away."

Sutter said that the new paper should help scientists better understand how to use supernova data to get a better handle on dark energy. But he thinks the authors made an unwarranted leap in suggesting that, as Sarkar put it, "a key pillar of the standard cosmological model is rather shaky."

"If you took out the strong claims that the authors are trying to make, it's an interesting nuts-and-bolts methodology paper," Sutter said. "But it doesn't really even begin to rock the foundations of modern cosmology."