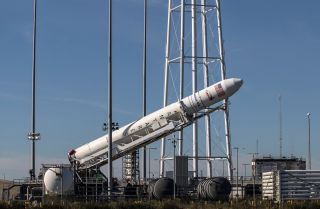 The Antares rocket is raised onto the launch pad at the Mid-Atlantic Regional Spaceport in NASA's Wallops Flight Facility on Oct. 14.
(Image: © Orbital ATK)

The Antares rocket reached its seaside launchpad on Wallops Island, Virginia on Thursday (Oct. 13) ahead of a planned cargo delivery mission to the International Space Station for NASA. It is scheduled to launch an Orbtial ATK-built Cygnus cargo ship to the station on Sunday (Oct. 16) at 8:03 p.m. EDT (0003 Oct. 17 GMT) from the Mid-Atlantic Regional Spaceport at NASA's Wallops Flight Facility on Wallops Island. The launch was delayed from a Friday liftoff due to the impact of Hurricane Nicole at a mission tracking station in Bermuda.

NASA spokesman Keith Koehler of Wallops Flight Facility told Space.com that additional delays are still possible as NASA and Orbital ATK are working to assess the damage Hurricane Nicole might have inflicted on the tracking station in Bermuda when it made landfall on Thursday. The delay was the latest schedule slip for a mission that was initially slated to lift off in July. For now, Sunday's nighttime launch remains on track and could be visible from a wide region along the U.S. East Coast, weather permitting. [Viewing Guide: How to See the Nighttime Antares Rocket Launch]

In a photo taken Wednesday (Oct. 12), the rocket is departing the Horizontal Integration Facility, where the different parts of the multistage rocket are connected. Here, the two-stage Antares was recently paired with the Cygnus spacecraft, a pressurized cargo module that can carry up to 5,952 pounds (2,700 kilograms) of payload to the space station.

This mission, labeled CRS OA-5, will be Orbital ATK's sixth unmanned cargo supply mission and the seventh planned flight for its Cygnus spacecraft. Its fourth planned launch ended in a fiery explosion in October 2014. The private aerospace company is contracted by NASA to fly these missions to the space station.