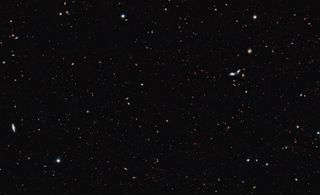 The image was taken by the Hubble Space Telescope and covers a portion of the southern field of the Great Observatories Origins Deep Survey (GOODS). This is a large galaxy census, a deep-sky study by several observatories to trace the formation and evolution of galaxies.
(Image: © NASA, ESA/Hubble)

More than a trillion galaxies are lurking in the depths of space, a new census of galaxies in the observable universe has found — 10 times more galaxies than were previously thought to exist.

An international team of astronomers used deep-space images and other data from the Hubble Space Telescope   to create a 3D map of the known universe, which contains about 100 to 200 billion galaxies. In particular, they relied on Hubble's Deep Field images, which revealed the most distant galaxies ever seen with a telescope. [Video: Our Universe Has Trillions of Galaxies, Hubble Study]

Then, the researchers incorporated new mathematical models to calculate where other galaxies that have not yet been imaged by a telescope might exist. For the numbers to add up, the universe needs at least 10 times more galaxies than those already known to exist. But these unknown galaxies are likely either too faint or too far away to be seen with today's telescopes.

"It boggles the mind that over 90 percent of the galaxies in the universe have yet to be studied," Christopher Conselice, a professor of astrophysics at the University of Nottingham in the U.K., who led the study, said in a statement. "Who knows what interesting properties we will find when we observe these galaxies with the next generation of telescopes.”

Looking far out into deep space also means looking back in time, because light takes a long time to travel across cosmic distances. During the study, Conselice and his team looked at parts of the universe up to 13 billion light-years away. Looking this far allowed the researchers to see partial snapshots of the evolution of the universe since 13 billion years ago, or less than 100 million years after the Big Bang.

They discovered that the early universe contained even more galaxies than it does today. Those distant galaxies were small and faint dwarf galaxies, they found. As the universe evolves, such galaxies merge together to form larger galaxies.

In a separate statement, Conselice said that the results are "very surprising as we know that, over the 13.7 billion years of cosmic evolution since the Big Bang, galaxies have been growing through star formation and mergers with other galaxies. Finding more galaxies in the past implies that significant evolution must have occurred to reduce their number through extensive merging of systems."

The results of the study are detailed in The Astrophysical Journal.