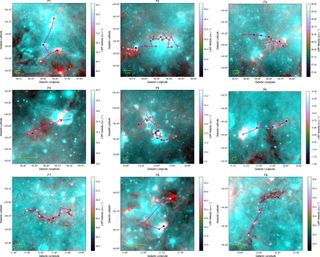 The skeleton of the Milky Way galaxy is coming into focus: A group of researchers recently dug up a cache galactic "bones" using a method that could answer key questions about these objects.

Galactic "bones" are long, cold, dense filaments of gas that have been discovered running through the center of the Milky Way's spiral arms. But many other filaments have also been found in the fringes of the galactic arms, or in between them, prompting questions about where these features form.

The new paper reports the identification of 54 galactic filaments, nine of which have been previously identified. This is the first census of a large portion of the galaxy, according to the authors of the new work. The team used a computer algorithm to identify the filaments (previous investigations have searched for these filaments "by eye."). The authors say the method can help them begin to answer questions about how the filaments formed, how they affect the growth and development of the galaxy, and what happens to them over time. [Photos: Stunning Photos of Our Milky Way Galaxy]

In 2012, a group of scientists at the Harvard Smithsonian center for Astrophysics (CfA) announced that a cold, dense thread of gas called "Nessie" was actually running straight through the center of one of the Milky Way galaxy's four main spiral arms. The arms are made up of a sparser collection of gas, dust, stars and other cosmic objects (that could perhaps be considered more "flesh" than the bones). Nessie, which is at least 260 light-years long, was already known to scientists, but no one realized its apparent connection to the spiral arm.

The discovery raised questions about Nessie's formation: Could the gravitational weight of the arm have formed this "bone"? Did the entire galaxy have a skeleton running through it? Since that discovery, a few other studies have identified a handful of other filaments; while some seem to have definite associations with the structure of the galaxy, some lie in between the arms.

The problem with trying to answer questions about the galactic bone formation is that there haven't been enough filaments to conduct a comprehensive study, according to Ke Wang, an astronomer with the European Southern Observatory and lead author on the new paper.

In order to do a characteristic study of the galactic filaments, Wang and his colleagues set out to complete the first large-scale census of the galaxy, and identify as many of these features as possible.

The team built a computer program inspired by something called a "minimum tree spanning" algorithm, which was invented back in the 1920s, and used today to optimize networks, including roads and water pipe systems, Wang told Space.com. The new program looks through a data set that has identified single points in the galaxy that feature the kind of cold, dense gas that defines the filaments. The program then tries to show that groups of those points are connected and make up a single structure.

This first survey used data collected by the Caltech Submillimeter Observatory 10 meter (32.8) telescope, which covered nearly half the galactic plane, as well as data from the Spitzer Space Telescope, Wide-field Infrared Survey Explorer (WISE), and the Arizona Radio Observatory.

The filaments identified in the new paper are between 10 and 276 of parsecs long, where one parsec is about 3.2 light-years, or about 18 trillion miles — in other words, these features are massive. (At 260 light-years long, Nessie is about 79 parsecs). The team identified 54, in a region that covers almost half the galactic plane. In the paper, the authors speculate that there are about 200 filaments of about this size in the entire galaxy.

"By revealing a relatively complete (in the searched region which is about half the Galactic plane) and a statistically significant sample, we are now confident with the statistics," Wang said in an email. "We find that most large filaments concentrate along major spiral arms, but only about 30% of them run along the center of spiral arms." Wang defines "bones" as those that lie in the center of a galactic arm.

"[The astrophysical community is] really at the start of revealing the whole population of these kinds of filaments in the entire galaxy," Wang told Space.com.

The new cache of galactic filaments identified by Wang and his team seems to have only opened up more questions about these cosmic objects. While some previous studies have shown that the bones can be found preferentially inside the galactic arms, others have shown that they form preferentially outside the arms, Wang said. But, previous studies only had a few filaments to study, he said. (He noted that various studies have also provided slightly different definitions of what constutites a galactic filament).

So right now, scientists don't know how the filaments form of why about 30% of them are showing up in the middle of galactic arms. Wang said scientists have hypothesized that the filaments could be formed by the "differential rotation of of materials in the galactic disk," by turbulence in the interstellar medium, by magnetic fields, or some combination of factors.

"With the observations so far, including ours and other teams’ work, we are now at the starting of answering this question," Wang said. "The community is excited about these large filaments, and there are more ongoing observational and theoretical works. I think in a few years' time we may have an answer."