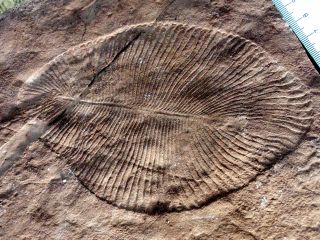 Evidence suggests that microbes existed on Earth as far back as 3.7 billion years ago, a billion years after the planet formed. Animal remains, however, don't appear in the fossil record until 600 million years ago during the Ediacaran period, though there are indirect signs that animal life may have gotten started much earlier.

Scientists are attempting to put a date on the earliest lifeforms in the kingdom of Animalia, but without an actual cast of a body they've had to rely on the credibility of "trace" fossils to show signs of an animal's presence in the form of footprints, scratches, feeding marks or burrows. Some scientists claim to have found trace fossils made by animals more than a billion years ago, raising controversy over whether animal life could have existed this early. There are also trace fossils from the Ediacaran Period and soft bodied animals were known to exist during this period, so understanding the tracks they made is important for studying the early animals.

Giulio Mariotti, an oceanographer from Louisiana State University, and colleagues, examined supposed animal trace fossils from the Ediacaran Period, and found that it is possible that some of them could be microbial in origin. The results, which were recently published in a paper entitled "Microbial Origin of Early Animal Trace Fossils" in the Journal of Sedimentary Research, raise questions about the reliability of trace fossils as evidence for early animal life. [Alien Life, Landscapes and the Art of Space (Gallery)]

The research was funded by the Exobiology & Evolutionary Biology element of the NASA Astrobiology Program.

Many of the Ediacaran animal trace fossils are found within "wrinkle" structures, small ridges and pits interpreted as evidence of ancient microbial mats. Microbial mats are comprised of layers of microorganisms, and fossilized mats are among the earliest clear signs of microbial life. Microbial mats were widespread in the Precambrian, the period before animal life became extremely common and diverse. But the mats were no longer able to flourish in certain marine areas when grazing animals became more abundant because the animals destroyed the structures.

Mariotti and colleagues devised an experiment to try to create trails of grooves and pits similar to the trace fossils. They did this by moving microbial aggregates across sand at the bottom of a tank of water by creating waves in the water. Microbial aggregates are small cluster of microbes which are larger than sand but less dense. This low density enables them to be moved across the sand at the bottom of the tank by very low energy waves.

The use of low energy waves is important as waves with higher energy would also erase the trail left in the sand. A wide variety of trails were produced by the aggregates depending on the wave conditions and the size of the aggregate. Some of these trails were strikingly similar to those that are currently deemed to be Ediacaran trace fossils, meaning that it is possible that some trace fossils are actually not fossils at all and are instead caused by the movement of microbial aggregates.

However, not only did the trails produced by the wave tank experiment replicate the supposed animal traces, the experiment also produced a wrinkle structure in the sand. The aggregates caused the wrinkle structure when they were smaller than the amplitude of the wave, where as the trails were formed when the aggregates were larger than the wave amplitude.

This research does not necessarily mean that all early trace fossils were caused by microbial aggregates, however it does put forward a plausible alternative explanation for those that occur alongside wrinkle structures. Therefore, possible trace fossils from the Ediacaran period or earlier should be looked upon with skepticism until it is possible to rule out microbial aggregates as a cause of the grooves and pits in the rock. [Life on Mars: Exploration & Evidence]

Trails caused by aggregates and those caused by animals can be distinguished in some cases if certain distinctive features exist. For example an animal trail can be "self avoiding," meaning that the animal didn't cross back over its own trail as it had already searched for food in that location. Unfortunately, most of the more distinctive signs of animal activity are rare until the very end of the Ediacaran period.

It is much easier to distinguish younger trace fossils from aggregate trails. "There is much more evidence that recent tracks were formed by animals," explains Mariotti. Trace fossils created in the time since the Ediacaran are more complex because they are three-dimensional, meaning that they go into the sediments such as a tunnel, and cannot be reproduced with the moving aggregates. "It is easier to challenge old trails because they have less ancillary information associated with them," said Mariotti.

The formation and evolution of Earth's earliest life is crucial in order to inform us of what types of life might exist on other planets. To do this, we need concrete evidence of what the earliest animals on Earth were like. Mariotti and his team plan to perform further experiments to examine the geometry of aggregate trails and how well animal trails are preserved in sediments that have an abundance of microbes compared to sediments with no microbes. They hope that these experiments will help distinguish real animal fossils from the aggregate trails, and therefore further our understanding of the earliest animal life on Earth.