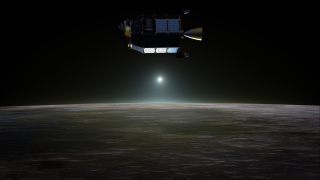 This artist’s concept of NASA's Lunar Atmosphere and Dust Environment Explorer (LADEE) spacecraft in orbit above the moon. LADEE scientists announced the discovery of a ring of tiny dust particles around the moon in 2015; now, scientists have discovered even smaller dust particles around Earth's largest satellite.
(Image: © NASA Ames / Dana Berry)

The moon is shrouded by an unstable cloud of "nanodust" kicked up by cosmic impacts, and lit up by sunlight, a new study finds.

Airless space objects such as the moon are surrounded by tenuous layers known as exospheres, which are made of particles gravitationally bound to those bodies. Unlike the particles of thicker atmospheres, like that of Earth, which regularly collide with each other, those in exospheres rarely collide. [The Moon: 10 Surprising Facts]

The particles in exospheres may originate in part from the way airless bodies are worn down by their environment — for example, by meteoroid impacts or storms of high-energy particles from the sun. As such, analyzing exospheres can shed light on these "space- weathering" events.

From 2013 to 2014, an instrument aboard NASA's Lunar Atmosphere and Dust Environment Explorer (LADEE) spacecraft collected data for just such a study of the moon's exosphere.

Last year, researchers reported that the probe had detected a permanent asymmetric exosphere made of dust particles as small as 300 nanometers, or billionths of a meter in diameter, about the same width as a wavelength of orange light. The particles in this exosphere are not permanently aloft — rather, forces acting on the moon's surface sporadically kick up a certain amount of dust, said study co-author Amanda Cook, a lunar scientist at NASA Ames Research Center in Silicon Valley, California.

Now, scientists analyzing LADEE data have found evidence in the exosphere of much smaller nanodust that is nonetheless dense enough to detect via the sunlight it scatters. And this smaller-grain dust appears to come and go with meteoroid streams.

"We weren't actually looking for a fluctuating exosphere," Cook told Space.com. "It's just something that came out of the data."

The researchers examined two sets of data from the shadowed side of the moon, which yielded the best conditions for low-light observations. One set of data was taken near the peak of Quadrantid meteoroid stream impacts to the moon in January 2014, whereas the other set was captured three months later during a time of relatively weak meteoroid activity.

During the meteoroid stream, the spacecraft saw scattered sunlight, which is consistent with dust grains less than 60 nanometers wide. Less such light was detected during the quieter period.

The nanodust cloud may envelop the moon and vary over space and time, depending on meteoroid impact rates, the researchers suggest.

"This result is exciting because if the detected signal is indeed originating from nanodust, then there seems to be much more of it than we expected to see, by several orders of magnitude," study lead author Diane Wooden, a lunar scientist at NASA Ames Research Center, told Space.com.

Increasingly, observations of other airless bodies in the solar system, such as the asteroids and Mercury, "indicate that very small particles are present in their exospheres as well," Wooden said.

Future study of these small dust grains could reveal details about the meteor showers, solar flares or the solar wind that propelled them, Wooden said, as well as details about magnetic anomalies on planetary surfaces.

The scientists detailed their findings online Aug. 15 in the journal Nature Geoscience.