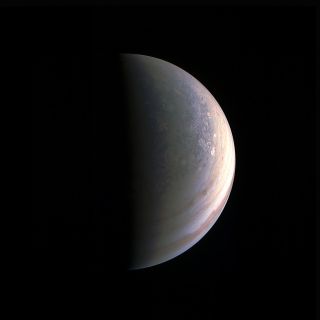 NASA's Juno spacecraft has beamed home the first-ever photos of Jupiter's north pole, and scientists can hardly believe their eyes.

Juno captured the images on Aug. 27, when the probe skimmed just 2,600 miles (4,200 kilometers) above Jupiter's cloud tops during the first of three dozen close flybys of the solar system's largest planet.

"First glimpse of Jupiter's north pole, and it looks like nothing we have seen or imagined before," Juno principal investigator Scott Bolton, of the Southwest Research Institute in San Antonio, said in a statement. [Photos: NASA's Juno Mission to Jupiter]

"It's bluer in color up there than other parts of the planet, and there are a lot of storms," Bolton added. "There is no sign of the latitudinal bands or zone and belts that we are used to; this image is hardly recognizable as Jupiter. We're seeing signs that the clouds have shadows, possibly indicating that the clouds are at a higher altitude than other features."

Saturn has a huge hexagonal storm swirling at its north pole. But Jupiter lacks such a vortex, the new photos show.

"There is nothing on Jupiter that anywhere near resembles that," Bolton said. "The largest planet in our solar system is truly unique. We have 36 more flybys to study just how unique it really is."

The $1.1 billion Juno mission launched in August 2011 and reached Jupiter nearly five years later, on July 4 of this year. But Juno's instruments were turned off on this latter date, because mission team members wanted to focus on executing the make-or-break, 35-minute orbit-insertion burn.

So the Aug. 27 approach marked the first opportunity for the Juno team to photograph Jupiter up close and make detailed measurements with its suite of eight science instruments. (The spacecraft is currently in a highly elliptical, 54-day orbit around the planet.)

One of these instruments, the Jovian Infrared Auroral Mapper (JIRAM), captured views of Jupiter's north and south poles in infrared light, revealing hot spots that had never been seen before, mission scientists said.

"We were amazed to see it for the first time," JIRAM co-investigator Alberto Adriani, of the Istituto di Astrofisica e Planetologia Spaziali (Institute of Astrophysics and Space Planetology) in Rome, said in the same statement.

"No other instruments, both from Earth or space, have been able to see the southern aurora," he added. "Now, with JIRAM, we see that it appears to be very bright and well-structured. The high level of detail in the images will tell us more about the aurora's morphology and dynamics."

"Waves detected the signature emissions of the energetic particles that generate the massive auroras which encircle Jupiter's north pole," said Waves co-investigator Bill Kurth, a research scientist in the Department of Physics and Astronomy at the University of Iowa. "These emissions are the strongest in the solar system. Now we are going to try to figure out where the electrons come from that are generating them."

Next month, Juno is scheduled to perform another engine burn that will shift the probe into a 14-day-long orbit. The spacecraft will continue gathering data — especially during its close flybys over the planet's poles — before ending its mission with an intentional death dive into Jupiter's atmosphere in February 2018.

Juno's observations should help scientists better understand Jupiter's composition and structure, including whether the giant planet harbors a core of heavy elements. This information should, in turn, shed light on the formation of Jupiter, the solar system and planetary systems in general, NASA officials have said.