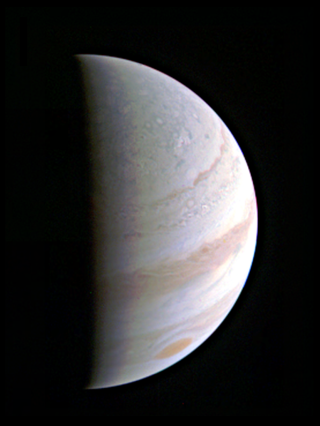 NASA's Juno spacecraft snapped this photo of Jupiter from a distance of 437,000 miles (703,000 kilometers) on Saturday (Aug. 27) as it approached the planet for its closest flyby.
(Image: © NASA/JPL-Caltech/SwRI/MSSS)

NASA's Juno spacecraft whizzed by Jupiter on Saturday (Aug. 27), successfully completing the first — and closest — of 36 orbital flybys planned for the duration of the probe's mission.

Juno arrived at Jupiter July 4 after a five-year journey, and this will be the closest approach of the entire mission, with the spacecraft grazing over the tops of Jupiter's clouds at a distance of just 2,600 miles (4,200 kilometers) and a speed of 130,000 mph (208,000 km/h).

During this encounter, Juno had every single one of its science instruments up and running for the first time in the mission. But it will be some time before most of the data and images from the flyby will be available to the public, researchers said. [See more Jupiter photos by NASA's Juno probe]

"We are getting some intriguing early data returns as we speak," Scott Bolton, principal investigator of Juno from the Southwest Research Institute in San Antonio, said in a statement. "It will take days for all the science data collected during the flyby to be downlinked and even more to begin to comprehend what Juno and Jupiter are trying to tell us."

The first flyby data to be released will be high-resolution photographs from JunoCam, the spacecraft's visible-light camera. NASA will likely release those photos in the next couple of weeks. Images from JunoCam will offer the closest and most detailed views of Jupiter's atmosphere, NASA officials said.

"We are in an orbit nobody has ever been in before, and these images give us a whole new perspective on this gas-giant world," Bolton said.

Juno will continue to collect data on Jupiter's atmosphere, weather, magnetic fields and formation history until 2018. Then, the spacecraft is scheduled to plunge to its death into Jupiter's atmosphere, taking measurements all the while. But NASA says scientists will have enough data about Jupiter to study the gas giant for for years to come.