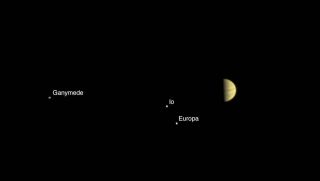 NASA's Juno spacecraft captured this photo on June 28, 2016, at a distance of 3.9 million miles (6.2 million kilometers) from Jupiter.
(Image: © NASA/JPL-Caltech/SwRI/MSSS)

PASADENA, California — NASA's Juno probe has just given humanity a new perspective on the cosmos.

In the weeks leading up to the spacecraft's arrival at Jupiter Monday night (July 4), Juno captured a stunning video of the four Galilean moons — Callisto, Europa, Ganymede and Io — circling the giant planet in a first-of-its-kind view of celestial dynamics.

"This is the king of our solar system and its disciples going around it," added Bolton, who's based at the Southwest Research Institute in San Antonio. "To me, it's very significant, because we're finally able to see — with real video, with real pictures — this motion, and we've only been able to imagine it up until today."

The Juno video is a shout-out of sorts to one of history's greatest scientists. In 1610, famed Italian astronomer Galileo Galilei discovered the moons subsequently called Galilean, and he deduced from their movement over the course of multiple nights that they orbit Jupiter

"It was a revelation, and it changed our culture and our perspective of ourselves forever: Earth was not the center," Bolton said just before unveiling the video.

"He imagined this, and after that, for centuries, we have imagined how the planets move and how the stars move, and we've only been aided with computer animation or the efforts of Hollywood," Bolton added. "Well, tonight that's going to change."

The video is composed of images Juno took with its JunoCam instrument between June 12 and June 29, as the spacecraft closed the distance to Jupiter from 10 million miles (16 million kilometers) to 3 million miles (5 million km), NASA officials said.

Other dramatic visuals should be in the offing; Bolton said the Juno team plans to capture another video as the spacecraft loops back around toward another close approach of Jupiter in late August. (Juno was captured Monday night into a highly elliptical 53-day orbit; in October, the probe will perform another engine burn to shift over to its 14-day science orbit. Juno will then study Jupiter's composition, interior structure, and magnetic and gravitational fields in detail through February 2018.)

The $1.1 billion Juno mission launched in August 2011. The probe's observations should help scientists better understand the origins of Jupiter and, by extension, the solar system's early days, mission team members have said.