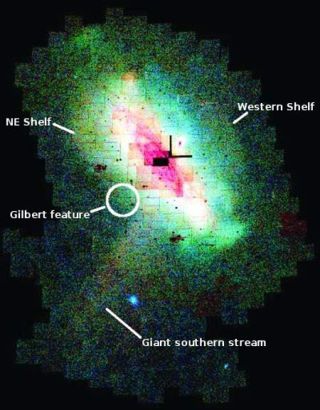 Streams of stars at the edges of the Andromeda galaxy evidence a collision between the Andromeda and a dwarf galaxy that likely took place about 700 million years ago.
(Image: © Alan McConnachie, Cambridge University)

Streams of glittering stellar gems on the outer edges of Andromeda are remnants of an ancient galactic collision that helped shape the spiral galaxy.

Astronomers using the DEIMOS spectrograph on the Keck II Telescope in Hawaii determined this by surveying Andromeda, our galaxy's nearest large galactic neighbor,  and discovered a trail of stars which they believe were part of a different galaxy that merged with Andromeda some 700 million years ago.

The findings support previous computer simulations of a dwarf galaxy merging with Andromedaand could help astronomers calculate Andromeda's total mass, a slippery value that, once arrived at, could help shed light on the elusive dark matter that pervades the universe.

Also known as M31, Andromeda is located only 2.5 million light-years from Earth. Like other spiral galaxies, Andromeda is made up of a flat disk of stars and gas, a bright central bulge of densely concentrated stars, and at times, a dim, spherical skirt of stars that extends to large distances [images].

The visible matter is just fluff, however, in terms of mass. The bulk of the mass in a spiral galaxy comes from dark matter, an exotic entity detectible only through its gravitational force. Scientists estimate that dark matter makes up five-sixths of the matter in the entire universe.

Large galaxies are believed to be built partly by the merging of smaller galaxies, an event that destroys the smaller galaxy, said Karoline Gilbert, a graduate student at the University of California, Santa Cruz, who presented the Andromeda findings at the American Astronomical Society meeting in Seattle earlier this month.

'Measuring the amount of the tidal debris that exists in present-day galaxies allows astronomers to examine the role mergers play in galaxy formation,' she said.

Several twinkling areas-including a stream of stars located south of the galaxy, called the "giant southern stream," and a faint extension of Andromeda's disk called the "northeast shelf"-in the galaxy's outskirts are most likely tidal debris from previous galaxy mergers.

The discovered tidal debris features are almost an exact match with the features predicted in the computer simulations, Gilbert said. This implies that this new stellar stream and the giant southern stream, as well as the other stellar features reproduced in the simulations, came from the same parent galaxy.

Because they are moving together, astronomers can use the stars in the tidal debris to measure the strength of gravity around the Andromeda galaxy, said Mark Fardal of the University of Massachusetts Amherst who created the computer models.

Gilbert's discovery of a new tidal debris feature, combined with velocity measurements of the other related tidal debris, will provide observations necessary to measure how much dark matter is in Andromeda, he said, and how it is distributed.