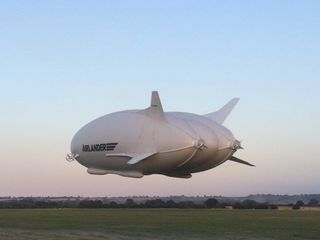 The world's largest aircraft, a helium-filled, blimp-like airship, has taken to the skies for the first time, successfully landing after its maiden voyage from Cardington Sheds in Bedfordshire, England, today (Aug. 17).

The company that designed and manufactured the Airlander 10 airship, Hybrid Air Vehicles, was bursting with excitement on their Twitter page.

"How brilliant is this? Testament to a GREAT British innovation and an amazing small company," read another of their tweets.

A hybrid that borrows technology from airplanes, helicopters and airships, the Airlander 10 is a whopping 302 feet (92 meters) long — that's longer than the largest passenger airliner, the Airbus A380 (also called the Superjumbo). [Huge Airship: See Photos of the Building of the Airlander 10]

Though the Airlander 10 is designed to stay aloft — at altitudes of up to 20,000 feet (6,100 m) — for five days when manned and up to two weeks without humans onboard, tonight's flight was just a quick test, according to Hybrid Air Vehicles.

"Landed. Just a quick flight tonight to prove the concept and needed to land before dark," the company tweeted.

The company sees plenty of potential for the giant aircraft. "It can stay in the air for days and even weeks carrying a lot of weight on an ultra-stable platform," Chris Daniels, head of partnerships and communication at Hybrid Air Vehicles, told Live Science in March. "And it also has the versatility to land and take off from pretty much any surface, including water, carrying up to 10 tonnes [about 22,000 lbs.] of cargo."

With those qualities, Daniels says the Airlander 10 could be used for search and rescue, patrol and surveying, as well as a Wi-Fi platform for rock festivals. Another use? "Passenger flight (think safaris and luxury tourism) or for cargo to remote regions where there aren't good roads or railways, or perhaps an airport doesn't exist," he told Live Science.