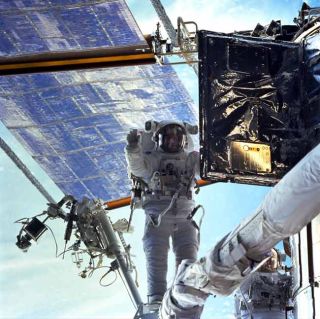 Astronaut John Grunsfeld stand on a foot restraint and prepares to replace a radio transmitter on the Hubble Space Telescope.
(Image: © NASA)

If things go according to plan, the Hubble Space Telescope will undergo its fifth tune-up in 2008, more than 16 years after deployment. For astronaut John Grunsfeld, who will be onboard, the mission has both personal and scientific meaning. This being his third time to the orbiting telescope [video], Grunsfeld calls himself "literally a Hubble Hugger."

Hubble orbits 360 miles above Earth. It weighs as much as two adult elephants. And it is equipped with an arsenal of science instruments that have produced an unprecedented string of scientifically useful and universally popular photographs and other data. During its lifetime, Hubble has completed about 93,500 trips around the planet, taking three-quarters of a million snapshots and probing 24,000 celestial objects and phenomena.

"Hubble has truly transcended just being an astronomer's tool for science," Grunsfeld said in a recent interview here at the Space Telescope Science Institute, command central for the orbiting observatory. "It is an icon for science and as I travel around the country or around the world, people know Hubble-people have an idea of what Hubble does, people recognize that it's important."

That's why Grunsfeld took it so hard when this Hubble servicing mission was initially cancelled by former NASA Administrator Sean O'Keefe after the deadly shuttle Columbia accident in February 2003.

The announcement instigated a chorus of protest from the public, politicians and the astronomical community. "The decision hit me in the head like a two-by-four," Grunsfeld said then.

Time is running out for Hubble. The batteries are nearly depleted, its steer-controlling gyroscopes are shutting down one-by-one and the wear and tear from years in space is taking its toll. Without some serious TLC-tasks slated in the proposed service mission-Hubble might cease to function as a science instrument anytime in the next year or two. Eventually, without installation of a mechanism to bring the telescope back to Earth safely it would spin out of control.

"This is a very complex observatory that requires lots of care and feeding," Grunsfeld said.

So ever since the service mission was cancelled, Grunsfeld and others have fought to have it reinstated. Behind the scenes, he lobbied and ultimately convinced O'Keefe to consider a robotic mission to Hubble.

Mike Griffin, who stepped in as O'Keefe's replacement in April 2005, ultimately put a full-blown service mission back on the agenda. After lengthy analyses of the safety of sending a shuttle mission to Hubble, the NASA Administrator gave the green light last October.

The mission is expected to breathe years of additional life into Hubble, extending its expiration date to 2013.

One reason the Hubble mission underwent such thorough scrutiny is due to an inherent risk factor.

For most shuttle missions, the craft gets launched into an orbital trajectory that allows it to reach the International Space Station (ISS) if necessary. "You can live on the station a long time while we figure out other ways to get people back down," Grunsfeld said. But the Hubble telescope is in a different orbit, and the shuttle would be out of reach of the station.

"That's why Hubble really is a risky mission," Grunsfeld said. "What Mike Griffin has decided is we will do Hubble because we believe the shuttle is safer than it's ever been."

A second shuttle will be prepared to launch in the event a rescue is needed. "We still realize that it's a risky business," Grunsfeld said.

Over a series of five spacewalks, astronauts will complete nuts-and-bolts work to keep Hubble alive.

They will also install two new instruments: the Wide Field Camera 3, which has visible, near-UV and near-infrared capabilities; and the Cosmic Origins Spectrograph (COS), which will use ultraviolet vision to study the formation and evolution of galaxies and ultimately how the universe's structure has changed over time.

For Grunsfeld, the most significant and trickiest task will be to revive the Space Telescope Imaging Spectrograph (STIS), which conked out after a power failure in August 2003.

Installed on Hubble in February 1997, the STIS separates incoming light into its constituent colors, giving astronomers a chemical map of a distant object. Since deployed, STIS has been critical in the confirmation of black holes at the centers of galaxies, made the only discovery of an atmosphere around an exoplanet and helped confirm the age of the universe.

The repair job would typically be completed in a clean room, where mechanics would don sterile garbs and be equipped with tiny screwdrivers. The instrument is too bulky to even move it into the shuttle for repairs.

"The first problem is that the power supplies are deep in the instrument and behind covers," Grunsfeld said. "If we could take STIS out of Hubble and bring it to the shuttle it would be relatively straightforward, but you can't do that."

The most optimal power supply for replacement is beneath a cover plate mounted to the instrument with more than 100 tiny screws and washers. "And that's the kind of thing we have no capability to do with the current set of tools," he said. "So we've developed a new power tool- a mini power screwdriver-and ways of grabbing these screws so they don't get loose inside the telescope, which could be disastrous."

Once this sweat-dripping operation is complete, the astronaut can change out the power-supply card-and the real fun begins.

"The card has 300 or so tiny gold pins on the back for replacement that we have to slide in. But you can't really see it because we have on these huge bubble helmets. You can't get your head in there with a tiny flashlight. So it's going to be hard," he said.

Grunsfeld and other service team members have practiced the repairs for hours and hours in a simulated environment. With a background in ballooning, Grunsfeld said he has experience reaching into instruments and completing repairs like this one without stereo vision.

Who will complete the STIS repairs? That is still up in the air, but Grunsfeld said he'd like to do it.

Even with a tune-up, Hubble won't last forever. After shutting down, HST is planned to remain in orbit until at least 2021 until it is allowed to splash down into the ocean.

Grunsfeld hopes to be there to say goodbye when that happens: "I hope there's a cruise that goes out to the Pacific. We'll get out our walkers and sit on the deck and watch Hubble re-enter and we'll have a huge party. Maybe in the meantime we'll service it again."

Even after a splashdown, Hubble will stay alive, if only in history books. "If we look ahead 500 or 1,000 years and imagine Encyclopedia Galactica some student might be reading, and he's going to read about the major advancements in science through humankind, and there'll probably be a picture of Galileo looking through the first telescope that he used for astronomy."

"But Hubble will definitely be there as this paradigm-changing, mind blowing telescope that people made that really changed the history of humankind, and I think it's neat to be a part of that."