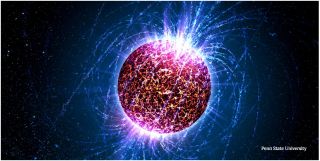 We are now in an incredible new era of astronomy where the faint ripples in spacetime caused by distant black hole collisions are being detected and studied. These are the most energetic events in the cosmos and, by "listening in" to their gravitational wave signals, these black hole mergers have finally been directly observed.

Then, on June 14, a second detection was announced, revealing yet another black hole merger. Only this time the black holes were smaller, "weighing in" at 14 solar masses and 8 solar masses.

Both observations revealed an astonishing amount of information about the pairs of black holes before and after their powerful collisions, including the fact they were spinning and their precise masses. What's more, the gravitational wave signals were very much in line with our theoretical predictions of what gravitational waves generated by black hole mergers should look like. These first detections are a testament to our theoretical understanding of black holes, considering that, up until Sept. 15, 2015, we'd never actually observed any kind ofdirect signal from a black hole (though we already had an abundance of indirect evidence that black holes and gravitational waves were physically out there).

So, we have direct observational proof of the existence of gravitational waves (and, indeed, black holes themselves) and we now know we can build laser interferometers sensitive enough to detect the most minuscule fluctuations in spacetime. Now astrophysicists want to probe even deeper in the hope of detecting the collisions of neutron stars, which are a few orders of magnitude less massive than black holes and their gravitational waves will be much fainter.

Neutron stars are created after massive stars run out of fuel and explode as supernovae. After the stellar fireworks, a tiny spinning mass of ultradense matter may be left behind. The intense gravity of this neutron star crushes normal matter into an extreme state governed by quantum dynamics. Thought to be a massive ball of neutrons -- subatomic particles found in the nuclei of normal atoms -- a neutron star can be thought of as a giant atom unto itself; a massive nucleus composed of only neutrons trapped in a crushing gravitational field, spinning fast and often possessing a powerful stellar magnetic field.

Some of these neutron stars can turn into pulsars, blasting intense radiation from their magnetic poles, appearing as flashing lighthouses in the universe.

Before Feb. 11, these questions would have remained a theoretical curiosity, but now we have a natural probe into some of the most massive objects in the universe and gravitational waves could be used to reveal the hearts of colliding neutron stars, possibly cracking them open and revealing the physics that lie within.

"Ultimately, (gravitational waves) may answer the question, whether neutron stars are composed solely of ordinary atomic nuclei, or if they contain more exotic matter in the form of dense deconfined quark matter," said physicist Aleksi Vuorinen, of the University of Helsinki, Finland, in a statement.

The key problem with trying to understand neutron star physics is that there is currently no way we can simulate the extreme conditions neutron star matter experiences on Earth. The closest we can come is to collide particles inside powerful accelerators like the Large Hadron Collider (LHC) near Geneva, Switzerland, to produce a very short-lived,hot quark-gluon plasma. Though particle collisions may reveal some qualities of this exotic state of matter,governed by Quantum Chromodynamics (QCD), it comes woefully short of simulating a neutron star's dense environment.

"The quark-gluon plasma that is produced in heavy ion collisions can be thought of as a hot but not very dense soup of quarks and gluons, while quark matter is a very dense and cold, essentially solid state, of matter," said Aleksi Kurkela (from CERN and the University of Stavanger in Norway) in an interview with Phys.org. "Our work in fact bridges the gap between these two systems, as our result is applicable at all temperatures, unlike any of the previous results."

Until now neutron star matter has been simulated in a cold state. But if we are to understand what gravitational waves from neutron star mergers look like, we need to simulate what actually happens during a cataclysmic neutron star collision. And needless to say, things would get hot. Really,really hot.

Kurkela and Vuorinen have now carried out simulations of neutron star collisions generating temperatures up to a trillion degrees (1x1012 Kelvin) to see what kinds of gravitational wave signals these extreme collisions produce. Ultimately it is hoped that these theoretical models will help physicists understand what the first gravitational waves generated by neutron star collisions will look like and whether they will reveal that neutron stars have "textbook-like" neutron cores or "exotic" quark-filled cores.

"The hope is that the gravitational wave signal from a merger of two neutron stars or a neutron star and a black hole would provide detailed information about the structure of neutron stars," said Kurkela. "This in turn would enable researchers to infer the equation of state of the matter the stars are composed of, i.e., the thermodynamic properties of nuclear and quark matter."

This research has been published in the journal Physical Review Letters.