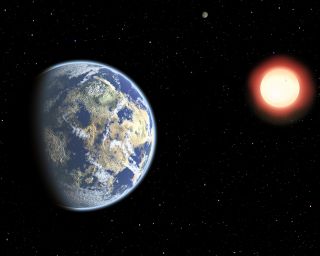 This artist's illustration shows a red dwarf star orbited by a pair of habitable planets. Because red dwarf stars live so long — trillions of years — the probability of cosmic life grows over time. As a result, Earthly life might be considered "premature,” a new study suggests.
(Image: © Christine Pulliam (CfA))

Astrobiologists will probably have their hands full in a few trillion years.

The odds of life evolving throughout the universe are 1,000 times greater in the far future than they are now, according to a new modeling study. The finding suggests that life on Earth may be "premature" in the cosmic scheme of things, researchers said.

"If you ask, 'When is life most likely to emerge?' you might naively say, 'Now,'" study lead author Avi Loeb, of the Harvard-Smithsonian Center for Astrophysics, said in a statement. "But we find that the chance of life grows much higher in the distant future."

Loeb and his colleagues modeled how likely life is to arise at any point throughout the lifetime of the universe, starting at 30 million years after the Big Bang, when the first stars had created enough carbon, oxygen and other "heavy" elements thought to be necessary for life, and ending 10 trillion years from now, when the last stars will burn out. (The Big Bang occurred about 13.8 billion years ago.)

The sun will die perhaps 5 billion years from now, but the smallest stars can live for up to 10 trillion years, giving life plenty of time to take root.

Dwarf stars do indeed seem to pose some serious challenges to the evolution of life: They're incredibly active in their youth, firing off lots of powerful flares that could strip away the atmospheres of potentially habitable planets.

Studying nearby dwarf stars and their planets with instruments such as NASA's $8.8 billion James Webb Space Telescope, which is scheduled to launch in late 2018, should help clarify matters, Loeb and his colleagues said.

The new study has been accepted for publication in the Journal of Cosmology and Astroparticle Physics. You can read it at the online preprint site arXiv here: http://arxiv.org/pdf/1606.08448v2.pdf