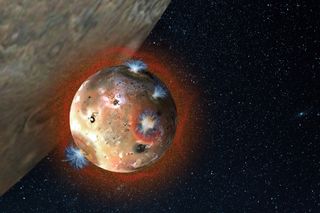 Jupiter's volcanic moon Io boasts an atmosphere made from sulfur dioxide gas — when the satellite is in sunlight. For the first time, researchers have observed the atmosphere during the moon's daily pass through Jupiter's shadow, watching that atmosphere temporarily freeze and collapse.
(Image: © Southwest Research Institute)

Jupiter's active moon Io has a collapsible atmosphere: New views show the satellite's shroud of sulfur dioxide freezing when Io enters its planet's shadow each day and converting back to gas when the moon emerges.

Io, Jupiter's fifth moon, is the solar system's most volcanically active body; plumes of the sulfur dioxide gas bursts from multiple active volcanoes, reaching up to 300 miles (480 kilometers) above the moon's surface at a scalding 3,000 degrees Fahrenheit (1,650 degrees Celsius). The Jupiter moon's surface, on the other hand, is frigidly cold, and gets even colder when Jupiter blocks out the sun — which prompts the atmospheric collapse.

"This confirms that Io's atmosphere is in a constant state of collapse and repair, and shows that a large fraction of the atmosphere is supported by sublimation of sulfur dioxide ice [when it turns to gas]," John Spencer, a researcher at Southwest Research Institute (SwRI) in Colorado and co-author on the new work, said in a statement. "Though Io's hyperactive volcanoes are the ultimate source of the sulfur dioxide, sunlight controls the atmospheric pressure on a daily basis by controlling the temperature of the ice on the surface." [Amazing Photos: Jupiter's Volcanic Moon Io]

"We've long suspected this, but can finally watch it happen," Spencer added in the same statement.

The researchers used the Gemini North telescope in Hawaii and the Texas Echelon Cross Echelle Spectrograph (TEXES) to watch Io cross into and out of Jupiter's shadow on two different nights. At the time, Io was more than 420 million miles (675 million km) from Earth. Previous studies were unable to make out Io's atmosphere in the dark, but this new work relied on detecting the atmosphere radiating heat, researchers said in the statement.

Io leaves Jupiter's shadow after 1.7 Earth days, which is 2 hours of Io's day, and the sulfur dioxide sublimates — goes straight from solid to gas — and pumps up the atmosphere once again when the moon re-enters sunlight.

Understanding the volcanic, lava-covered Io is key to understanding the environment around Jupiter, where NASA's Juno spacecraft arrived July 4, researchers said in the statement. "Io spews out gases that eventually fill the Jupiter system, ultimately seeding some of the auroral features seen at Jupiter's poles," said Constantine Tsang, the study's lead author (also at SwRI). "Understanding how these emissions from Io are controlled will help paint a better picture of the Jupiter system."