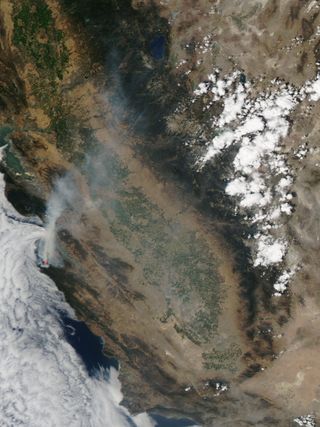 The Soberanes wildfire (marked in red) burning near Monterey, California, seen from space by the Moderate Resolution Imaging Spectroradiometer (MODIS) aboard NASA's Aqua satellite on July 30.

The Soberanes fire, currently burning near Monterey, California, was imaged by a NASA satellite on Sunday afternoon, as the blaze continued to swallow up tens of thousands of acres of land.

The fire, which has been burning for a little more than three weeks, had destroyed over 33,000 acres on Saturday (July 30), according to the Los Angeles Times. But in just a few days, the engulfed area has expanded to include 43,400 acres (67.8 square miles or 175.6 square kilometers) according to the state wildfire management agency, Cal Fire.

The image of the fire, trailing white smoke out over the Pacific Ocean, was captured with the Moderate Resolution Imaging Spectroradiometer (MODIS) aboard NASA's Aqua satellite at 4:35 p.m. EDT (20:35 GMT). The red lines on the image show actively burning areas detected by MODIS.

Due to the fire, 350 residents have been evacuated, and a total of 57 residences and 11 outbuildings (such as barns and sheds) have been destroyed, according to Cal Fire.

Another image taken by the Aqua satellite on July 31 shows the northern section of California, as well as Nevada, Oregon, Washington and part of Idaho. You can see more images of the fire in this NASA image gallery, by searching "sobranes" (which is how it's spelled on the site).

The Aqua satellite is a NASA mission to study the water cycle on Earth, and its suite of instruments takes measurements of evaporation from the oceans, water vapor in the atmosphere, clouds, precipitation, soil moisture, sea ice and land ice. It also tracks snow cover on the land and ice, vegetation cover on the land, phytoplankton, and dissolved organic matter in the oceans, among other things.

Imaging wildfires is not specifically part of Aqua's mission, but most NASA satellites do more than what's on their list of mission objectives, said Jeff Schmaltz, a support scientist for the MODIS instrument.

"There are many side benefits that can be gained by different innovative uses of the data [from a NASA satellite]," Schmaltz told Space.com in an email. "This is one example where the imagery from MODIS is used to show folks many of the natural (and man-made) phenomena that we can see from space."