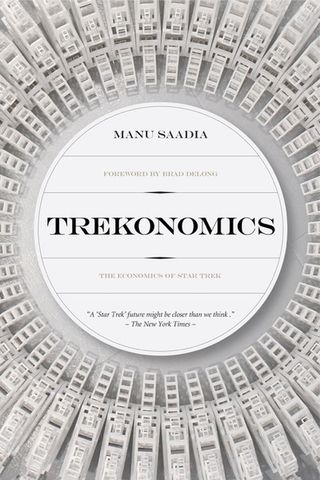 "Trekonomics" (Pipertext, 2016), by Manu Saadia, explores the implications of a no-money society like that in "Star Trek."
(Image: © Pipertext)

Money isn't a factor for many of the "Star Trek" crews. As Captain Jean-Luc Picard explained in "Star Trek: First Contact": "The acquisition of wealth is no longer the driving force of our lives. We work to better ourselves and the rest of humanity," he said.

On the surface, this appears to be a utopia. So many people today labor under student debt, mortgages and an uncertain pay flow from employers. To remove money from the equation would make things easier for everybody, right? Or would they simply get bored?

Manu Saadia — a Los Angeles resident who advises startups for a day job — tackled the tricky issue of a no-money society in his new book, "Trekonomics" (Pipertext, 2016). He fully admitted in his book that there are many things humanity does just for the love of it; his own book, for example, was not done for economic reasons. But there would be some interesting implications if an entire society followed that philosophy, he said. [The Evolution of 'Star Trek' (Infographic)]

Saadia told Space.com that he wishes "Star Trek" would show more of Starfleet's ordinary citizens, and not the "1 percent" who live on spaceships. That's because he's interested in what a typical person would do in the "Star Trek" universe, he said. Would they just relax? Further their education? In a moneyless society, people would need to be more accepting of those who prefer to do little, he said.

Even Captain Picard and subsequent captains presented a writing challenge for "Star Trek," Saadia added. "The pursuit of material things is no longer the main driver in society, so it's hard to tell stories about people who live in bliss," he said. "That was always the problem, and the villains have to come from the outside. ... It's hard to find villains from within 'Trek' society."

There are some exceptions to the no-money rule, which applies for all crews after James T. Kirk's in the first series, in which people still used "Federation credits" to buy things. Saadia's book has a whole chapter on the Ferengis, money-loving aliens who enjoy pursuits like gambling. (The Ferengis are portrayed in detail in "Star Trek: Deep Space Nine," the television series after Picard's.) And money is needed to deal with certain aliens outside of Starfleet.

But in a universe with no money, there are some open questions. Is there private property in "Trek"? How do people show value, if not in the accumulation of wealth and things? What is the meaning of something "belonging" to you if it cannot be easily "resold"?

"One of the avenues for achieving the good life, when it's no longer being a captain of industry, then you want to be a captain of a ship," Saadia said. "You want to explore, do science, advance stuff and share it — and become somebody of great reputation."

Saadia said he supposes that being a Starfleet officer could be an avenue to take risks in a society in which most of the risks are gone. "Why would you want to lock yourself up on a spaceship and go face the Borg? Why would anybody want to do that? It turns out there are some people who want to do that."

For Saadia, the book project was a culmination of 15 years of wanting to write a book about economics in "Star Trek," a poorly covered topic compared to the franchise's technology, politics and even philosophy, which numerous books have covered.

"To get [a book] through, you need a passion and an interest in it that supersedes financial payoff. That's kind of like 'Star Trek,'" he said.