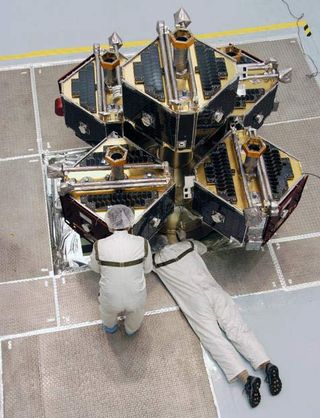 NASA isreadying five small satellites to launch spaceward next month on a mission topinpoint the source of aurora-boosting storms from Earth's magnetic field.

Thespacecraft quintet is part of NASA's THEMIS mission to find the trigger pointof geomagnetic substorms, which begin somewhere in the Earth's magnetic fieldand, within minutes, swoop inside the Moon's orbit to the planet's upperatmosphere and brighten the aurora borealis - also known as the NorthernLights. The speed of the substorms makes tracking their starting pointimpossible with a single spacecraft, mission researchers said.

"Findingthe elusive substorm point of origin is a question almost as old as spacephysics itself," THEMIS principal investigatorVassilis Angelopoulos, of the University of California at Berkeley, toldreporters in a Wednesday teleconference. "[The mission] is a stepping stonetowards understanding space weather phenomena that affect our lives."

A UnitedLaunch Alliance Delta 2 rocket is slated to loft the THEMIS mission, which isshort for the lengthy moniker Time History of Events and MacroscaleInteractions during Substorms, on Feb. 15 during a 19-minute window that opensat 6:07 p.m. EST (2307 GMT) [image].The $200 million mission, the launch of which has been delayed since Octoberdue to booster issues, is named for the Greek goddess of justice, NASAofficials said [image].

Firstidentified in the 19th century, geomagnetic substorms are recurringphenomena spawned by a sudden release of charged particles - collected from theSun's solar wind - in the Earth's magnetic field. The high-energy particlesfollow the Earth's magnetic field lines until they strike the upper atmosphere,giving a boost to the Northern Hemisphere's aurora borealis, researchers said.

While asubstorm's aurora amplification seems like a limited visual effect, a series ofsuch storms can occur during major space weather events that interfere withcommunications satellites or pose risks to astronauts in orbit, Angelopoulossaid.

Only fourTHEMIS satellites are required to complete a primary two-year mission [image].After reaching orbit, two of the probes will be sent on a trajectory thatcarries them about one-sixth of the way to the Moon while two others take upstations about halfway to the Moon. The spacecraft will line up with oneanother and ground stations on Earth every four days during their respectiveorbits, researchers added [image].

The fifthTHEMIS satellite is a spare in case one of its counterparts fails during theinitial two-year mission.