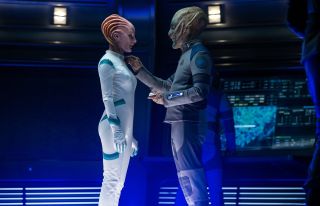 Blue Origin founder and CEO Jeff Bezos (right) has a cameo in the film "Star Trek Beyond," which opens July 22, 2016 across the United States.
(Image: © Justin Lin Twitter (@trailingjohnson))

Jeff Bezos is about to score some serious nerd points in his battle with fellow spaceflight billionaire Elon Musk.

Bezos — who runs the private spaceflight company Blue Origin, as well as Amazon.com — has a cameo in the new movie "Star Trek Beyond," which opens in theaters across the United States this Friday (July 22).

Based on his makeup job, it's safe to assume that Bezos plays some sort of alien in the film. You can see it for yourself in an amazingly surreal video that Bezos posted today (July 20) via his Twitter account, @JeffBezos. In the brief video, a scaly, ridge-faced Bezos tucks into some lunch with a plastic fork, and then washes the repast down with some bottled water (which he drinks using a blue plastic straw). [The Evolution of 'Star Trek' (Infographic)]

So Bezos has now drawn level with Elon Musk, the founder and CEO of SpaceX, in cinematic accomplishments. Musk had a cameo in the 2010 film "Iron Man 2," appearing at a party with protagonist Tony Stark, the billionaire industrialist played by Robert Downey Jr. (Downey and Jon Favreau, the director of the first two "Iron Man" films, have both said that they modeled the movie version of Tony Stark on Musk. Plus, SpaceX's Hawthorne, California, headquarters served as a shooting location in "Iron Man 2.")

It's worth noting, however, that Musk played himself in "Iron Man 2" and had a speaking part: Stark compliments him on SpaceX's "fantastic" Merlin rocket engines, and Musk replies that he's "got an idea for an electric jet."

So we'll have to see just what Bezos does in "Star Trek Beyond." If he neither talks nor receives kudos from another character about Blue Origin's New Shepard suborbital space vehicle, we may have to give the lead back to Musk.

Both Bezos and Musk have also been on "The Simpsons," voicing cartoon versions of themselves. Bezos appeared in a December 2008 episode called "The Burns and the Bees," while Musk starred in a January 2015 episode titled "The Musk Who Fell To Earth."

Musk also appeared in an episode of "The Big Bang Theory" last year, and both men have made the evening-talk-show rounds over the years.

The Bezos-Musk rivalry extends beyond the world of make-believe, of course. Both Blue Origin and SpaceX are developing crew-carrying spacecraft, and both have been building and demonstrating reusable rockets — a technological leap that Bezos and Musk have said could slash the cost of spaceflight and open up the heavens to exploration and human settlement.

Musk congratulated Bezos and Blue Origin on the accomplishment at the time via Twitter. (His handle is @elonmusk.)

"But credit for 1st reusable suborbital rocket goes to X-15 ‪en.m.wikipedia.org/wiki/North_American_X-15 … And Burt Rutan for commercial ‪en.m.wikipedia.org/wiki/SpaceShipOne … ," Musk added, referring to the U.S. Air Force/NASA X-15 experimental rocket plane and SpaceShipOne, the Rutan-designed vehicle that won the $10 million Ansari X Prize in 2004 after reaching space twice in the span of two weeks.

Musk also said in another tweet that it's much tougher to land a rocket during an orbital launch — as SpaceX had been trying to do with its two-stage Falcon 9 — than during a suborbital flight, as Blue Origin did.

Bezos pushed back against such comments during a news conference on Nov. 24.

"You have to remember, SpaceX is only trying to recover their first-stage booster, which is suborbital. The second point that I would make is that the SpaceX first stage does an in-space deceleration burn to make their re-entry environment more benign," Bezos said. "So if anything, the Blue Origin booster that we just flew and demonstrated may be the one that flies through the harsher re-entry environment. And then finally, the hardest part of vertical landing and reusability is probably the final landing segment, which is the same for both boosters."

SpaceX made a big breakthrough of its own on Dec. 21, successfully landing the first stage of a Falcon 9 during a satellite launch from Cape Canaveral Air Force Station in Florida. The company has since landed four more boosters — one at Cape Canaveral, and three others on robotic "drone ships" stationed in the Atlantic Ocean.

This string of successes appears to have calmed some jangled nerves, for the war of words between Musk and Bezos has subsided.