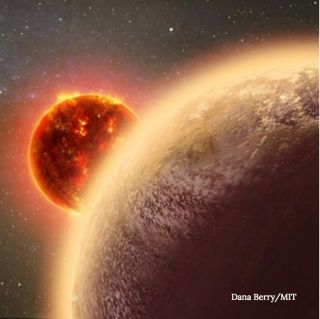 Liquid water is required for life as we know it to evolve. So, in our ongoing quest to find "Earth 2.0," the discovery of a rocky world possessing bodies of liquid water would be the Holy Grail for astronomers and astrobiologists alike.

As we look for these worlds, we seek out exoplanets that orbit their stars within the "habitable zone" — the perfect distance where it's not too hot or too cold for liquid water to exist.

Where should we look for these special exoplanets? Astronomers believe that the first truly habitable exoplanet will be discovered not around a sun-like star, but around a red dwarf. These diminutive stars are the most abundant type of star in our galaxy, so we have a better chance of detecting habitable worlds around them. (And Earth-sized exoplanets have been detected around red dwarfs.)

As red dwarfs are cooler than sun-like stars, a potentially habitable world will need to orbit a lot closer to get the required heating to maintain its water in a liquid state. And with this requirement comes a problem. Exoplanets with such compact orbits are known to become "tidally-locked", ensuring one hemisphere is always facing the star; one side of the world is in perpetual light, the other in eternal night.

WATCH VIDEO: Where Did Earth's Oceans Come From?

This planetary dichotomy is a challenge to astronomers who peg these extreme worlds as potentially habitable — having one side of a world bake while the other freezes doesn't inspire visions of a planet capable of supporting life. But in new research, all may not be lost. Depending on the interactions between their planetary surface and atmosphere, these tidally-locked worlds could set up their own natural "air-conditioning" system to balance out planetary temperatures, creating a viable atmosphere.

"We built hundreds of computer models to examine this interaction (between the surface of a planet and its atmosphere)," said astronomer Ludmila Carone, of the University of Leuven, in a statement. "In an ideal situation, the cool air is transported from the night to the day side. On the latter side, the air is gradually heated by the star. This hot air rises to the upper layers of the atmosphere, where it is transported to the night side of the planet again."

However, this "ideal situation" can be stymied by strong air currents in the upper atmosphere around the exoplanet's equator that effectively block the flow of hot high-altitude winds from the dayside to nightside hemisphere. This means there is little flow of air from one side to the other, leaving the star-facing hemisphere to bake while the far side freezes.

But when modeling rocky exoplanets with surfaces that have a high frictional effect on their atmospheres, the situation changes.

Carone's team modeled worlds with surface-atmosphere friction comparable with Earth and worlds that had ten-times more friction than Earth. In the latter case, the strong air currents didn't form, allowing an efficient transfer of air from one side of the planet to the other, thereby regulating its atmospheric temperature. This "air conditioning" effect balanced the planetary atmosphere, making it more habitable.

"Our models show that friction between the surface of the planet and the lower layers of the atmosphere can suppress these strong air currents. When there is a lot of surface friction, the 'air conditioning' system still works," Carone added.

For exoplanets in tight habitable zones around red dwarf stars, their surfaces need to apply more friction to their atmospheres than Earth does to allow proper air circulation to be set up. Presumably this means these potentially habitable worlds need to be covered in mountainous terrains to properly impact atmospheric flow.

So as we continue in our quest to seek out truly habitable worlds, we shouldn't discount tidally-locked exoplanets, they could still support habitable atmospheres if the conditions are right.